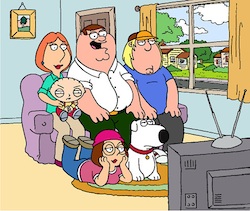 The Family Guy-Microsoft story has been tearing this country apart for too long. No more! Seth MacFarlane & Co. have found a new sponsor for their Almost Live special, and it’s none other than the movie Sherlock Holmes, which stars Robert Downey, Jr.

But there’s nothing to worry about, for Warner Bros. has stepped in with its checkbook and credit line to save the day.

It’s good news for those of you who still watch Family Guy.