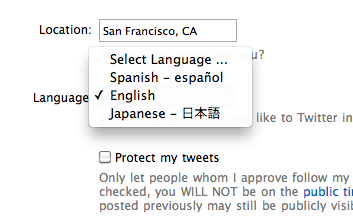 Last month, Twitter noted that it was seeking volunteers to help translate its service into other languages. Today, the first of those is ready to go, as Twitter has formally unveiled support for the Spanish language.

The Twitter Blog has a post about it right now, but co-founder Biz Stone has cheekily written it entirely in Spanish. We’ll go ahead and translate it for you:

Earlier this month we invited volunteers to translate into more languages Twitter. Thanks to these enthusiastic volunteers, Twitter is now officially available in Spanish. You can change the language or visit Twitter.com Settings and change the language setting in the option at the bottom right corner.

Spanish joins Japanese as the only languages besides English that Twitter currently supports. But more are coming soon, as Twitter previously noted that they’d like to have the “FIGS” languages. The “S” in there is Spanish with the others being French, Italian, and German.

Official support for other languages should undoubtedly help Twitter continue to grow after stalling a bit in recent months. And this Spanish support should also kneecap Meme, Yahoo’s Spanish Twitter clone (which is now also in English).