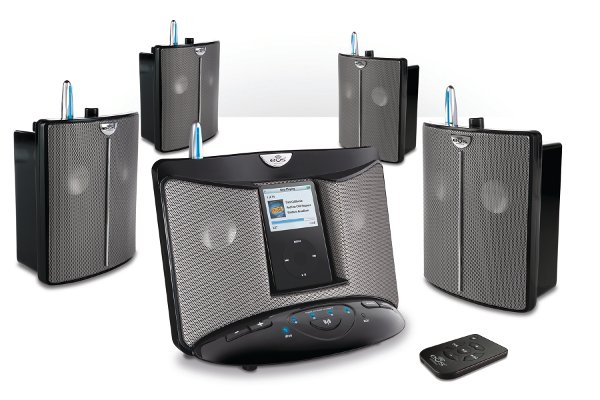 The Core System
The Eos core bundle contains a speaker with integrated iPod dock, a remote control, and an additional wireless speaker. You can buy wireless speakers individually, and pump music to up to four speakers from a single base station, for a total of five rooms filled with music. The base station is not too big, with ample room in the dock for the entire gamut of iPods and iPhones. On the front of the unit are plus and minus buttons for volume control, a wireless on/off toggle, a source input button, and a mute button. There are two LEDs on either side of the base: the one on the left is labeled “iPod” and the one on the right is labeled “AUX”. Obviously, pressing the “Source” button will toggle the audio source between a docked iPod and the line-in connection on the back of the unit.

Aside from the line-in jack, the back of the base station has a power port, a toggle switch for the Range Extended feature, and a link button which is used to set a unique ID for your Eos base station. In the unlikely event that your neighbor also buys an Eos, you can use the link button to make sure that your wireless speakers only play music from your base station.

The remote control is small, and the kind of thing I’d lose pretty quickly. I confirmed that the remote would operate a docked iPod, and then never touched it again. Maybe I’m an anomaly, but I usually just listen to my music on “shuffle”, and don’t have any need to interact with the iPod once the music starts playing.

The speakers in the base station were good. Speaker reviews are always a little tricky, because listening to music is such a subjective experience. So I won’t linger too longer here other than to say that I was entirely satisfied with the audio quality and the richness of the sound produced.

Expansion
Adding speakers is super easy. Just plug the speakers in and turn them on: they should find the base station automatically. Each speaker has its own volume control, so you can set sound levels on a per-room basis. Unfortunately, this is an entirely manual process: you need to turn the knob for each speaker on the speaker. There’s no centralized volume control, a la the Sonos system.

The speakers sounded as good as the base station: no complaints on audio quality.

The wireless speakers are billed as an all-in-one design, such that you plug the whole thing into the wall. You can certainly do that, but I find them to be a little too big for that kind of use. The power plug can be removed from the speaker, allowing you a little more flexibility with placement. I found that to be a really handy feature, though the power cord was, in most cases, just a little too short to allow me to place the speakers where I wanted. Also, removing the power plug from the speaker is a somewhat daunting process. The instructions — and a sticker on the speaker itself — says to “press down hard”. They’re not kidding. You have to really exert some force to get the plug free. Also, the power plugs are gigantic wall warts. Don’t expect to share an outlet with any other device, regardless of whether you use the all-in-one design or remove the plug from the speaker.

GigaWave Technology
The secret sauce in the Eos system is the GigaWave technology:

To avoid interference, Eos™ GigaWave uses proprietary frequency hopping digital spectrum technology (FHDSS). The special communications algorithm used in our GigaWave technology will not interfere with WiFi networks or digital products like Bluetooth and cordless telephones. This same technology allows Eos to stay clear of interference cased by with by other products that communicate in the 2.4 GHz , 5.8 GHz and the new Dect 6.0 cordless telephone frequency range.

I didn’t notice any interference or static, despite the countless WiFi and Bluetooth devices I have on at any one time. The speakers inside the house all worked fine, and it was fun to rock out to music through my abode without having to make any single source obscenely loud.

The range is listed as 150 feet. I put a speaker in my garage, which is maybe 75 feet from where I had the base station. In the default configuration, the signal would drop out pretty frequently. There was no static, and no faded signal: either it played, or it didn’t. I then enabled the Range Extender feature, which was surprisingly well-explained in the user manual:

To maintain a solid, interference free link the Eos system incorporates an advanced proprietary error correction scheme. Error correction is done by creating a slight delay between the transmitter and Wireless Speaker. Using this delay, Eos can confirm that the audio packets arrived at the Wireless Speaker/receiver. If the audio packet is not received, the Eos base station can resent it. Eos’ default delay (Range Extender Off) is 20 ms.

Turning on the Range Extender Switch increases the delay to 64ms. The increased delay allows Eos to resend more audio packets due to distance from the transmitter or ambient interference.

The Range Extender feature didn’t make for a perfect transmission to my garage, but it did make it noticeably better. There were still brief outages in my music playback, but there were far less and they were far shorter than when the Range Extender was off.

Uses
The intended primary use for the Eos is clearly to play music from an iPod or iPhone. Alas, this device isn’t specifically for iPhones, so you get that annoying screen: “This accessory is not made to work with iPhone” and are then prompted to turn on Airplane mode. Even though the Eos system is WiFi-friendly, I was repeatedly unable to stream last.fm music to my iPhone while it was in the base station.

If you want to manage your music, you’ll either need to deal with the ergonomics of using an iPod in the dock, or use the remote control. And remember, there’s no volume control with an iPod. As the manual states, “iPod volume jog wheel changes the headphone volume only and has no effect on the Eos base station volume.” So you’ll need to manually adjust volume on a per-room basis.

Perhaps a better solution is to connect the Eos base station to your Apple TV, or that home media PC that stores all your music. If you’re using iTunes, you can use the iPhone Remote app to control the music and the master volume from your phone.

The Bottom Line
I’m not the kind of guy who regularly wants to listen to the same music in more than one room of my house. I usually want music in only one room, anyway. If you’re the kind of person who would like to listen to the same music in multiple rooms, then the Eos may be a good choice for you. Or, if you can’t (or won’t) run speaker wire through your walls, the Eos would be worth considering. The Eos plays extremely well with other wireless devices, so you ought not have anything to worry about.

The retail price for the Core system (base station + one speaker) is $249 USD. That strikes me as a little much. It looks like there’s a sale going on right now, though, making that Core bundle only $199. I’m still not sure that’s a good price, but hey, it’s $50 you get to keep.