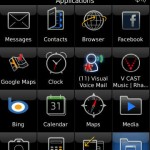 Alright, Verizon, you’re doing it wrong. Stop pushing apps onto my BlackBerry Storm. Within the last few months, YouTube, a Verizon-linked verizon of Slacker Radio, VZW Tones, and a V Cast Video app have been pushed to my phone. I thought that’s what App World is for; you know, apps. But now a terrible mobile version of Bing was pushed onto my Storm. Seriously, stop it.

I’m sure somewhere in the fine print of my contract allows Verizon to push whatever the hell they want to my phone. The contract probably says that they can listen to my phone calls and read my text messages. I don’t care about that stuff; let ’em. I lead a boring life and couldn’t care less if anyone listens in on my calls. But I don’t want any more stupid apps pushed to my phone just because Verizon is probably getting a nice financial kickback.

That’s why BlackBerrys have an app store now. If I wanted Bing Mobile, I could find it in App World and download it myself. That’s what I did with Slacker Radio. What I don’t need is more bloatware on my already slow and buggy BlackBerry Storm. The damn app doesn’t even run well on the Storm. It’s slow, unresponsive and thinks I’m in NYC. (I’m a thousand miles away, actually)

The Storm, and other Verizon BlackBerrys, didn’t come loaded with all the Verizon-branded apps that the carrier is noterious for loading on its handsets. Instead VZW is randomly pushing apps on to phones, which isn’t much better. Once again, Verizon, you’re doing it wrong. Leave our phones alone.