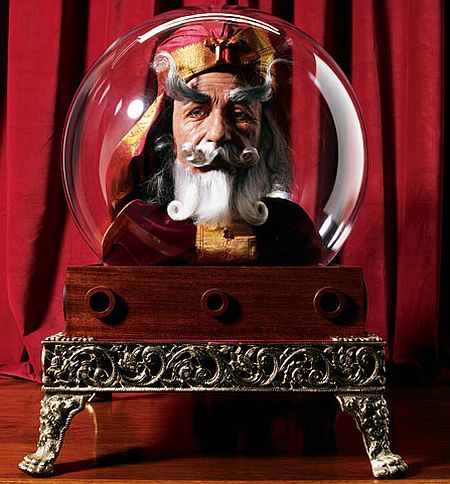 It’s time to put on the Swami hat and predict just what we have in store for 2010 and beyond. Considering all of the movement in the gadget world in the past few months, I’m fairly sure most of this going to be accurate. Given the current status of some of these technologies, it’s hard to prognosticate very far out but there are a few things that have become apparent over the past year, especially the rise of Android and our expectations for the iPad.

Without further ado… the envelope please:

It’s sad but true: Apple doesn’t care about Apple TV. All the real brain power is going to the desktop and laptop and probably onto the iPad. They’ve made it clear with the 27-inch iMac that they can make a high-resolution screen and powerful computer inside of a case the thickness of a college textbook. Who needs a TV, let alone an Apple TV?

The obvious conclusion here is that the 27-inch iMac becomes a real Apple TV. The Mac Mini already makes a great multi-media system and a quick update to FrontRow, now considered abandonware, may make it a great 10-foot interface.

I don’t even know what to say about this. All I can say is the iPhone 3GS++ had better be amazing and encourage the second coming of the FSM or else I may go Android.

Touchscreen devices are a way to show off Windows 7’s multi-touch capabilities but I haven’t had much luck using them or luck finding apps to run on them. Obviously folks like Sony and HP have been making bespoke media and recipe box applications but, as we all know, the world doesn’t run on dreams and rainbows. Tablets have a better chance of taking off than partially stationary devices like desktops and, to an extent, non-convertible laptops.

You may not know it or want to accept it, but 3D TV is coming. After James Cameron’s Avatar in 3D hits the big screen and then the small screen, everything will be coming up 3D.

You’ll have to wear sad, sad glasses but many Blu-Ray disks will soon ship with 3D content on the disk and require you to wear those sad,sad glasses. Add in 3D content for gamers and you’ve got a movement. We’ll have to quietly accept this until we have true holographic systems.

I personally think this will ruin the process of watching movies and playing games with friends and family as everyone without glasses is left out.

The iPod Touch and iPhone will obviously evolve into something like a Tablet? But then what? Manufacturers have been trying to sell tablets for years and Apple will show them how its done. Once the iPad drops, expect countless-iPad-alikes until someone hits the low price and high feature sweet spot that Apple tends to ignore.

While I’m not as high on the Droid as others at CG/TC/MC, I’m actually quite interested in what Droid means for Android. The phone is strikingly well-made, the OS is solid and clean, and the keyboard is usable. This means that Android is ready for prime time and that Symbian and Windows Mobile had better watch out.