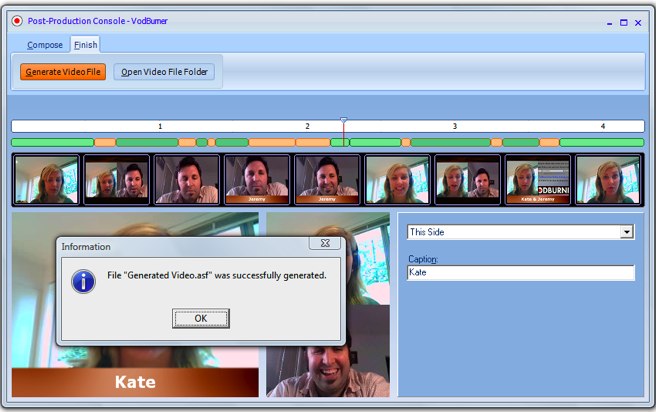 The app, which is $9.95 per month per computer, is fairly simple. Once downloaded, it will let you record a video and audio conversation via Skype and will then let you edit the final file within its software. What’s interesting about the app is that it actually detects who is talking (using volume) and will record the video of that person during the time. If both people are talking, the app will record video on both individuals in the frame. You can also add graphics and sub-titles to the videos and publish the clips as ASF files suitable for uploading directly to YouTube and other video-hosting services.

The end video is of course not pristine because users are often using webcams and the editing features are fairly basic (though Vodburner plans to release for advanced editing features in teh next release of the app), but the file can easily be produced into a nifty podcast. Ecamm and SuperTinTin do similar things with recording conversations, but VodBurner’s founder Jeremy Hague says that the app’s beauty is in it’s easy-to-use editing and production tools.

Netalia has also created other popular Skype apps including Skylook and Callburner. There’s been an uproar around Skype axing it’s “Extras” developers program, with many saying that Skype is out of touch with its developer community. But Hague said the Extras program was lacking in execution and is hopeful that Skype will launch a new and improved program for developers. And until then, says Hague, Netralia will continue to make apps that are useful to Skype users.