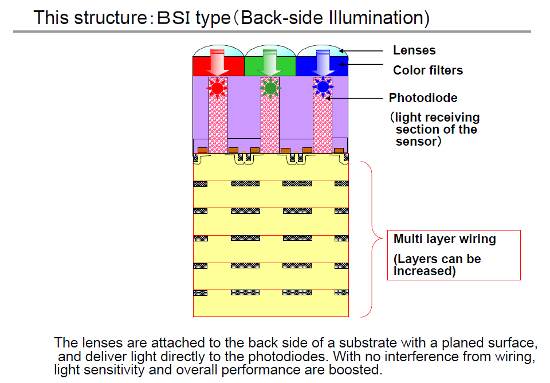 Toshiba just announced their latest advancement in CMOS technology, the BSI (back-side illumination) sensor. The BSI sensor is designed to improve high ISO (or low light) photography by decreasing the amount of noise that appears on images taken under these conditions.

This is one of the first major innovations in digital photography that we’ve seen in quite some time, and the potential is enormous. At this point of course, we don’t have any information about when we’ll see this tech in cameras or how much it will cost, but the press release does go in depth about how exactly the technology helps with the hgh ISO problem.

TOKYO, Japan., October 27, 2009 – Toshiba Corporation (TOKYO: 6502) today announced the launch of a new CMOS image sensor that will bring 14.6 million pixels to digital still cameras and to mobile phones supporting video imaging. The sensor, the latest addition to Toshiba’s “Dynastron™” line-up, is also the company’s first to integrate the enhanced sensitivity offered by back-side illumination technology (BSI). Sampling of the new sensor will begin in December and mass production will follow from the third quarter of 2010 (July–September).

BSI brings new levels of responsiveness to CMOS imaging. Lenses are deployed on the rear of the sensor on the silicon substrate, not on the front, where wiring limits light absorption. This positioning boosts light sensitivity and absorption by 40% compared to existing Toshiba products, and allows formation of finer image pixels.

Toshiba has made full use of the advantages of BSI to realize image pixels with a pitch of 1.4 microns, and to pack 14.6 million of them into a 1/2.3-inch sensor that meets the high level imaging and processing requirement, and that will also bring a new level of image quality to mobile phones. Toshiba will use the new sensor to promote its full-scale entry to digital camera market, and will continue to develop BSI products as a mainstream technology.

The new sensor will be mass produced at Toshiba’s Oita Operations, on industry leading 300mm wafer lines deploying 65nm process technology. Initial production will be at a volume of 500,000 sensors a month.

CMOS image sensors are a focus product of Toshiba’s System LSI business. Until now, their main application has been in mobile phones, where Toshiba could leverage its high density integration and low power consumption technologies. With the introduction of BSI CMOS sensors, Toshiba will reinforce the sensor business by expanding application to include digital cameras.