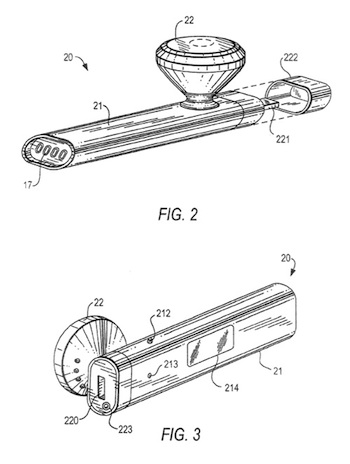 Writing about patents really ought to be banned, since so many companies file so many patents every year that it’s silly to cherry pick this one or that one, drawing attention to something that may never exist. Be that as it may, today an Apple patent was discovered that shows a wireless headset that includes a media player. Think of it as “a Bluetooth” with a built-in MP3 player.

The patent was originally filed in April, 2008, but the filing wasn’t published until today. As the illustration shows, the device would have simple, on-board controls—play, pause, etc.— for your convenience.

Now, we could be irresponsible and concoct a rumor along the lines of, “APPLE TO RELEASE THIS THING AT MACWORLD,” or just be honest: the odds of this thing coming out aren’t great. I mean, it could come out, but just because someone found a patent filing doesn’t mean it’ll ever come out. Did we see any fully descriptive iPhone patents before its first reveal in January, 2007? Nope. Have we seen any definitive iTablet patents? Nope.

You know what I mean. Carry on, and go eat some candy.