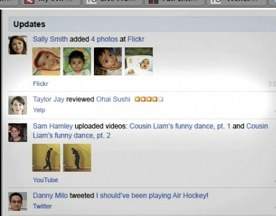 At today’s Yahoo analyst event, Yahoo exec Bryan Lamkin shed some light on the company’s recent status update numbers. Yahoo launched its “status-casting” feature a few months ago, which added basic status updates to its Mail and Messenger products. In both Yahoo Mail and Messenger 10, you can update your status and all of your contacts who also use either of those two products can see your updates.

Today, Lamkin says that Yahoo is seeing 800 million status message updates per month through this new feature. AIM has been doing this for sometime now, so Yahoo’s status update feature isn’t new but the quantity of updates is certainly something worth noting. The integration of these status updates into mail and IM represents the merging of private and public messaging.

Lamkin also mentioned a few other noteworthy stats, some of which have been reported before. Yahoo mail alone drives 100 billion messages a month while Flickr users have uploaded more than 4 billion photos, growing at a rate of 100 million per month a month. Of those 4 billion photos, 130 million have been geotagged. Lamkin says that “Yahoo Mail delivers more photos in a week via the inbox than those that get uploaded to Facebook in one month.”