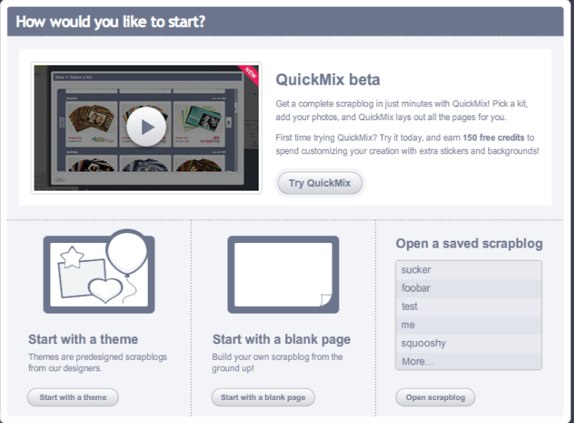 Scrapblog, a startup that lets you build rich Flash-based online scrapbooks, is launching a nifty new tool today, called QuickMix, which lets users create personalized scrapbooks in minutes. The launch is coupled with the announcement of Jill Braff as the new CEO and president of Scrapblog.

QuickMix lets users upload photos from a variety of photo sites and applications, including Facebook, MySpace, Flickr, Picasa and more. You can then select a pre-built “kit,” which is a layout and design for the online scrapbook. Kits have a variety of styles, including designs catered to weddings, birthdays, travel, holidays, and babies. For example, you could select a Halloween-themed kit for photos from the holiday. Then, QuickMix will instantly produce a digital scrapbook tailored to the photos themselves.QuickMix’s technology will crop all the photos and organize the images vertically and horizontally. I demoed the new feature and it’s very quick and easy to use; high-quality, pretty scrapbooks can be made in minutes.

QuickMix users can also tweak their scrapbook using the application’s online design tools, or access Scrapblog’s virtual marketplace to add additional stickers, backgrounds, music, video, and more. Scrapblog monetizes the site via this marketplace, which offers users premium stickers, backgrounds and images to decorate scrapbooks. After a scrapbook is created using QuickMix, the user has the option to print the scrapbook professionally and/or to share it online via Facebook or MySpace.

Scrapblog is also welcoming a new CEO, Jill Braff, today as the startup’s founder and CEO Carlos Garcia, steps aside. Braff most recently led worldwide publishing efforts including licensing, marketing and sales as SVP of global publishing at Glu Mobile.

The company, which recently raised $4 million in funding, was first introduced back in 2006, briefly went offline, and relaunched in March 2007. The site has grown to over 2 million registered users who have created over 4.4 million Scrapblog pages.