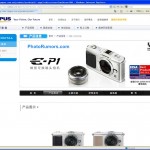 There was a rumor a few weeks ago that Olympus was going to launch another Micro Four Thirds camera before the end of the year dubbed the E-P2. This guy was suppose to have a rangefinder and hopefully be done up in the same retro fashion as the EP-1. Well, it looks like the camera will indeed be announced soon according to this somewhat official leak.

Photorumors found that Olympus China’s website has the model number listed there for the whole world to see, which seems to confirm that the event Olympus had scheduled for October 31 will probably be the EP-2 announcement. Let’s just hope this guy has the same goods as the original model but a slightly lower price.