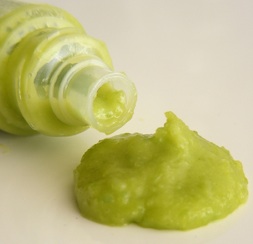 Netvibes, original widget homepage, is morphing into something much more interesting. The next version of the service, dubbed Wasabi, is a potent stream reader which consolidates news feeds, blogs, Twitter and Facebook streams, email, and much more in an extremely manageable interface. Wasabi will become available early next week in a private beta, but you can start signing up for it now.

CEO Freddy Mini demonstrated parts of Wasabi at our first Realtime CrunchUp in July. In addition to the traditional widget view, which breaks up your feeds and applications into a grid of boxes on your Netvibes homepage, Wasabi now also has a “smart reader” view. The smart reader borrows from traditional RSS readers in that all the feeds and widgets you subscribe to are presented together in one column, updated in reverse chronological order.

You can see just a list of headlines, or an expanded view with the full feed. It looks similar to Google Reader, except that Netvibes supports more than just RSS feeds. You can import your Twitter and Facebook streams (read-only right now), as well as Gmail, Yahoo Mail, Flickr photos, weather widgets, stock widgets, and more. “Any service that has a stream we can display it,” says Mini.

Rather than scan across 20 boxes, Netvibes users will now have the option to mash everything together and filter simply by what’s been posted most recently. Wasabi has infinite scroll, so you can keep going down until you’ve had enough. There is also a new mosaic view, which shows each item as a visual tile. When you click on a tile, you get an expanded view that allows you to read the item, while keeping a strip of navigational tiles up top (see screenshots below).

On the backend, Netvibes is speeding things up to make the stream as realtime as possible. It is caching content from the most popular feeds and pushing that down to users as soon as there are any updates, and it will also be supporting both the Pubsubhubbub (PuSH), which also launched at the Realtime CrunchUp, and RSSCloud standards aimed at eliminating the lag time inherent in RSS and Atom feeds.

So Wasabi is not only a potent stream reader, it is faster too. I won’t miss the widget view one bit. 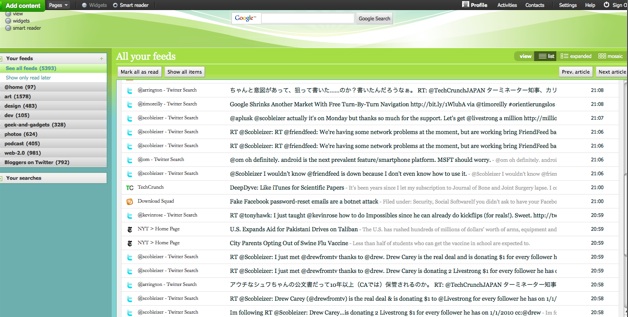 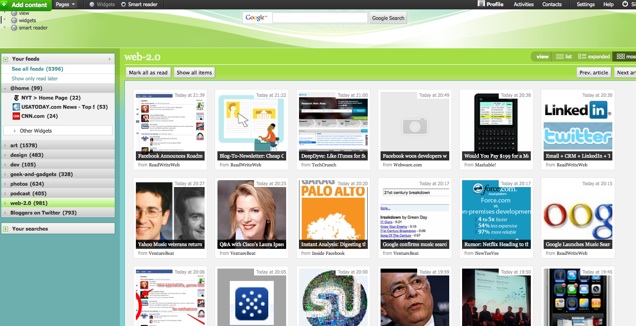 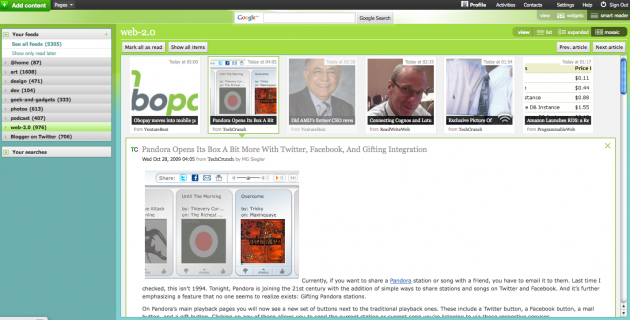