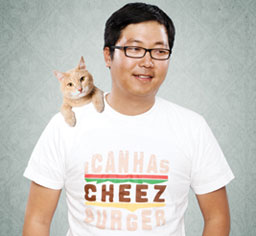 Ben Huh is usually holed up in his Seattle-based company Pet Holdings Inc—better known as the company that brings you I Can Has Cheezburger?, the FAIL Blog and nearly thirty other sites that aim to make you laugh for five minutes every day. But he’s down in the Bay Area this week to promote the launch of three new books “How to Take over the World: A LOLCat Guide 2 Winning,” “Graph out Loud,” based on GraphJam and “FAIL Nation: A Visual Romp through the World of Epic Fails.” A big party is happening tonight.

Annoyingly, Huh is also running around San Francisco this week doing all kinds of media interviews. But here are some things I pried out of him yesterday that you may not know.

A word first about Huh: People almost always open an interview by asking if he has cats or if he’s always been funny, which misses the point of what he loves about his job. Huh is a businessman. Unlike a lot of media entrepreneurs, he says his job has become more fun the larger the staff, the site, and the operational worries have grown.

People frequently forget that Huh actually acquired I Can Has Cheezburger? and the FAIL Blog—he didn’t start them. (More on that purchase price below…) Since then he’s opened dozens of humor sites, about 50% of which fail, but some grow spectacularly fast, proving that LOLCats wasn’t a fluke and that Huh has an eye for what makes something funny in that specific viral sort of Internet way. Right now, he’s got a spreadsheet of 150 ideas that he’s moving around, honing and assigning to a team of writers who each curate about five blogs each.

Simply put, Huh has built a serious company out of something inherently hard to take seriously. As he frequently says, it shouldn’t work, but it does.

Now, some details I pried out of Huh with the allure of coffee and a breakfast sandwich yesterday:

1. That I Can Has Cheezburger? purchase price was probably lower than the $2 million Time and others (ahem) reported. Huh is unflappably mum on what he spent, but he’s too good a business man to have ponied up that much—even as fast as the profitable site was growing. Plus, regulatory filings show his angel round he raised to buy that blog and build a company around it was just $2.25 million. When I asked why he’d spend almost the entire amount on one acquisition, he didn’t so much nod, answer or agree as make a face that said “Yes, thank you for not assuming I’m a total idiot.” But, yeah, he won’t comment.

2. Huh has really studied what makes humor catch and made an interesting observation: Male sites and female sites grow distinctly differently. Men tend to share by gut instinct, so male oriented sites grow faster but can churn users quickly too. Women are more trust-oriented, says Huh. That means they share links and sites less frequently, but with more credibility. So the sites grow slower but maintain their audiences better.

It’s an interesting observation given how much of the early breakout Web 2.0 were so male dominated, and Huh should know seeing the traffic patterns of Hawtness (slightly NSFW) and LovelyListing. (Guess which one is for men?)

For the record I Can Has Cheezburger? is about 50%-50% male-female, but nearly 100% geeks-who-love-cats, both of which have aided huge and sustained growth. As Huh explains it, dog people go to parks, cat people sit inside on computers.

3. Just how good that traffic is. The Pet Holdings Network boasts 12 million uniques a month and does 1 billion page views every four months. Those numbers are astounding for a 26-person, user generated content company built largely on frivolity.

We all know about Cheezburger, which surpassed 1 billion page views last month. But FAIL blog went from zero to 10 million page views-per-month in just 90 days, and the recently launched ThereIFixedIt.com has matched that pace.

That said, Huh doesn’t hugely care how fast a blog grows, as long as it grows. What gets one of his sites shut down is a huge spike and then a fall.

4. Revenues. Huh has done a great job making money in tough industries. While a lot of blogs are sputtering, his have 30% margins, posting CPMs anywhere between 15 cents and $8. The least profitable is clearly Hawtness, which Huh doesn’t even try to sell ads on, given the dodgy inventory. “It just hooks in readers,” he says.

Here’s the shocker: The company also makes 30% margins from book publishing deals, and advances and royalties make up nearly a third of the company’s revenues, which are in the “single digit millions.” More shocking: Huh can’t seem to get a publisher to sign him to a multi-book deal. This despite the fact that the first LOLcats book spent 13 weeks on the New York Times Bestseller List. Really, New York publishing houses?

Huh plans on releasing six books next year and – SPOILER ALERT- the third LOLCats book will be all about kittens.

5. Huh has a social network too. Even if you knew all of the above, this one must surprise you because it recently surprised Huh. Pet Holdings has long offered a log-in and profile for contributors who regularly post images and passively given them the ability to friend each other. The result? A niche social network with 1.3 million users. Huh hasn’t quite decided what to do with this revelation, but he’s thinking about it. As comparatively well as he’s done with blog ads and book sales, to really scale the company, he’d like a sexier revenue stream that can grow fast without massively growing content.