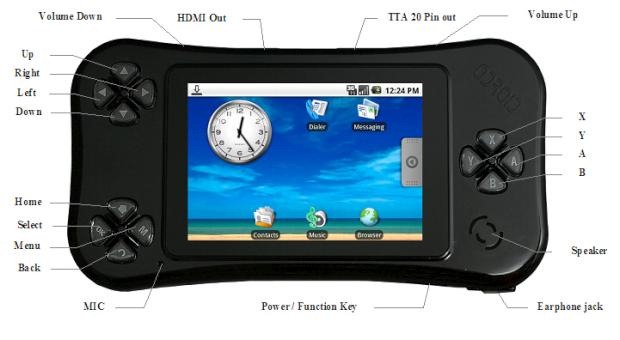 Perhaps someday you’ll buy an Android device to use primarily for gaming. It could happen! Pictured above is the ODROID, a gaming-focused portable running Android and packing a powerful 833MHz Cortex A8 CPU.

Other specs include 512MB of RAM, 3.5-inch capacitive touchscreen, Wi-Fi, Bluetooth, HDMI out, and the ability to act as a USB host. There’s no cellular chipset on board.

Apparently the first run of developer units have already sold out at around $320. A second batch is expected to follow in late November, with a consumer version planned for December. Aside from using the ODROID to play games, you can do all the non-phone Android stuff and watch HD movies at 720P thanks to the speedy processor.

While being able to play games from the Android Market’s list of currently-available titles, I’d personally have this thing running one of the NES, Genesis, or SNES emulators before I even got the plastic film removed from the screen. The actual D-pad and X/Y/A/B buttons would make for some seriously wonderful retro gaming.