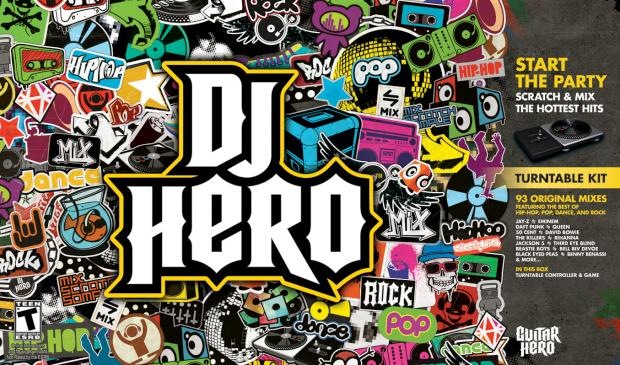 Yes, you can leave work early today. No need to ask your boss, he/she is okay with it.

If you haven’t had your fill of music rhythm games by now or you watched with a furrowed brow as guitar-based game after guitar-based game flooded the market, your giant headphones covering only one of your ears and held in place by your own shoulder just like your favorite DJs, then you’ll want to scrounge up between $100 and $200 for Activision’s DJ Hero, depending on your console and whether or not you want the special “Renegade Edition.”

Pricing is as follows:

Available today all over the place. Full press release below:

SANTA MONICA, CA – October 27, 2009 /PRNewswire/ — The party has started with the most anticipated music game of the year, as DJ Hero™ is now available at retail stores nationwide, Activision Publishing Inc. (Nasdaq: ATVI) today announced. DJ Hero invites audiences of all kinds to the party, bringing living room legends to the main stage with the newest innovation in music gaming with an exclusive 93-mix track list, created by a host of legendary DJs uniquely blending almost every genre of music including hip hop, rock, pop, R&B and dance. Featuring electrifying gameplay that incorporates the fundamentals of DJing in a fun and accessible format, and booming tracks from Rihanna to The Killers; Marvin Gaye to Daft Punk; Queen to the Black Eyed Peas, DJ Hero provides consumers an opportunity to interact and listen to music unlike ever before. Heightening the euphoric experience, the DJ Hero Renegade Edition delivers exclusive special edition hardware and a limited edition CD collaboration between two cultural icons – JAY-Z, the most successful solo recording artist of all time and hip hop legend, EMINEM – introducing unreleased material from EMINEM and JAY-Z’s first ever “best of” compilation.

“One of the best games I’ve played this year” with “the best soundtrack for any music game, ever” and “You’re going to want to have DJ Hero on hand for your next party.” – 9/10 – IGN.com Editors’ Choice Award. – IGN.com

“The best music game of the year and a leap forward for the genre.” – 92/100 – GamesMaster Magazine

“DJ Hero allows a player to get lost in a DJ universe, creating a genuine experience,” said JAY-Z. “It’s a perfect way to expose hip hop as all encompassing of every musical genre and how the DJ combines everything to make great music.”

“I think that the cool thing about DJ Hero is that the music is actually part of the gameplay,” said EMINEM. “You get a chance to experience what it’s like to be a DJ and scratch up different songs of mine in really great mixes.”

“When artists with the global appeal and cultural significance like JAY-Z and EMINEM come together you know it’s something groundbreaking,” said Dan Rosensweig, President and CEO of Guitar Hero. “DJ Hero pushes the boundaries of music and gaming with original music mixes and innovative game play that put the power of the DJ and the artistry of hip hop music into the hands of consumers around the world.”

Expanding upon the revolutionary easy to pick up/challenging to master gameplay mechanics developed and refined in Guitar Hero®, DJ Hero delivers an all-new interactive music experience that allows players to start the party and not only experience, but to hear music in an all-new way. Featuring mixes created by DJ AM, Cut Chemist, Grandmaster Flash, DJ Jazzy Jeff, J. Period, DJ Shadow, DJ Z-Trip and more, spinning over 100 individual songs, highlighted in 93 unique never-before-released mixes that blend genres of music, including hip-hop, pop, rock and dance, DJ Hero delivers the most diverse and international collection of music ever assembled in a music game by incorporating anthems from legendary artists. Created exclusively for DJ Hero, the turntable controller immerses fans into the DJ culture and a sea of music as they utilize and master various DJ techniques including scratching, crossfading and sampling, while leaving room for creative expression with a variety of effects and player chosen samples and scratches, transforming a face in the crowd into the life of the party.

The DJ Hero Renegade Edition includes a copy of the game, a premium Renegade turntable controller, hardshell turntable carrying case that converts to a performance-ready DJ stand, and an exclusive JAY-Z and EMINEM 2-CD pack featuring “best of” and new, unreleased material.

Available now, DJ Hero was developed by FreeStyleGames for the Xbox 360® video game and entertainment system from Microsoft, the PLAYSTATION®3 and PlayStation®2 computer entertainment systems and the Wii™ system from Nintendo. The game is rated “T” (Teen – Mild Suggestive Themes, Lyrics) by the ESRB. For more information about DJ Hero, please visit djhero.com, facebook.com/djhero and twitter.com/djhero.