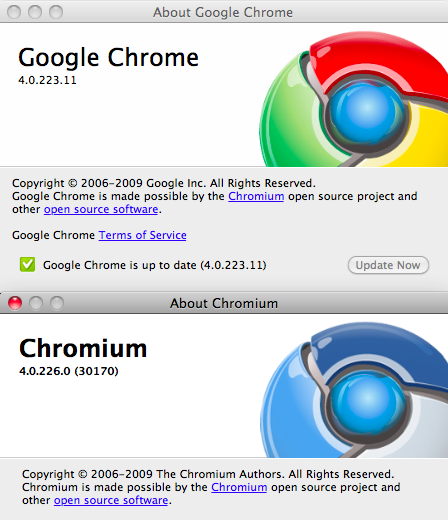 We’ve spent the past several months closely tracking the progress of Chrome for Mac. Well over a year after its release for Windows, there hasn’t been so much as a beta version for Mac (or Linux, for that matter) yet. Even Google co-founder Sergey Brin expressed his displeasure with this last week. But Brin also noted that he was using the pre-beta version of Chrome for the Mac, but warned that it was unstable. After months of using Chromium builds (the open source browser that Chrome is based on), I decided to give the developer version of Chrome for Mac a try once again. The results have been very good.

While recent Chromium builds have been a little shaky with a mixture of UI failures, bugs, and a nasty habit of “Chromium Helper” (the name of separate tab processes in Chromium) eating up your CPU, Chrome itself feels much more stable. It would seem that at some point recently, Google flipped the switch to push Chromium 4.0 releases into the Chrome for Mac developer channel. These don’t come daily like the Chromium builds, but only seem to pop up as an upgrade option when a stable build is found on the Chromium path. For example, right now, Chrome for Mac is 4.0.223.11 whereas Chromium for Mac is currently 4.0.226.0.

This is great because it allows you to skip the bad builds of Chromium, and only get the ones that are ready for primetime. It also allows you to skip digging through the Chromium web file structure to find the latest build as Chrome for Mac now updates for you with the click of a button.

The differences between the latest builds of Chromium and these developer builds of Chrome seem unnoticeable at this point. That’s what stopped me from using the developer builds of Chrome previously, they were far behind Chromium. That’s no longer the case. And, besides being more stable, the Chrome builds offer some additional perks, such as being able to import bookmarks, something which the Chromium builds turned off months ago for some unknown reason. (To be clear, this only works when you first load up Chrome. The Bookmark Manager itself still does not work yet.)

I’ve been using the developer build of Chrome for a solid week now. It has even auto-updated once. Are there crashes? Sure, sometimes. Are there bugs? Of course. But overall, none are keeping me from doing anything I normally do on the web as a relatively heavy surfer. I’ve kept the browser open for days in some cases, and it has remained stable without sucking up too many system resources. And I’ve been sure to try and use it as often as I can with more JavaScript-heavy sites like Facebook, Gmail, Digg, and others. For the most part, it seems to handle them all well.

Chrome Themes are visible from the Thumbnails page (in the lower right corner) just as they are in the Windows versions of Chrome. And yes, they all work, even if some are ugly (and some clash with Chrome for Mac folder icons in the bookmark bar). Sadly, bookmark syncing doesn’t appear to yet work even though it too is shown on the Thumbnail page. Printing does work though.

Chrome for Mac is still not quite as fast as it is on Windows, but it already seems comprable in speed to both Safari and what is still my browser of choice (mostly for its speed), Camino.

Those of you who have been doing the daily downloads of Chromium (maybe using our tool) should consider switching over to this developer build of Chrome. At this point it seems to have all the pluses without the minuses. Plus, it auto-updates for you, so you can remain on the cutting edge of Chrome.

Google has publicly said that it wants to have a version of Chrome for Mac out before the end of the year. A few weeks ago, seeing where the Chromium builds were heading, I would have thought that would be impossible. But the Chrome developer channels offers new hope. We could be nearing beta.

You can find the developer build of Chrome for Mac here.