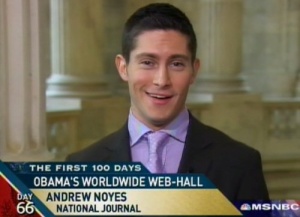 It’s an inevitable truth that companies who gain a significant impact on the lives and/or wallets of Americans better have some people firmly on the ground in Washington, D.C. – just ask the likes of Microsoft and Google.

That other online juggernaut, Facebook, is no exception to this rule, thus it’s no surprise to see them recruit another person to help manage public policy communications from the nation’s capital right under the company’s Director of Public Policy, Tim Sparapani.

Meet Andrew Noyes (29), an experienced journalist who most recently blogged for National Journal’s CongressDaily on ‘Politics And Policy in The Wired World” and contributed a number of articles to National Journal. (Read his bio for what else he’s done the past decade)

Here’s how Barry Schnitt, Director, Corporate Communications and Public Policy at Facebook, delivered the news to the troops (emphasis ours):

I wanted to let you know of a new hire for Facebook in Washington, D.C. Andrew Noyes, 29, will join the company as manager of public policy communications. Andrew, who formally starts in mid-November, brings a wealth of relevant experience to help Facebook manage and further develop relationships in the nation’s capital.

As Facebook continues to innovate and grow — with a rapidly growing user community of more than 300 million — it is important that we expand our capability to explain to policymakers, the press and the public how we enable people to share in a more trusted environment, help make the world more connected, and drive economic growth. Specific policy issues on the agenda for Andrew and the rest of Facebook’s DC office include enhancing cybersecurity and online safety, expanding digital privacy protection through user control of data, and protecting free speech.