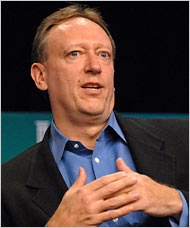 Miller reiterated some of what MySpace CEO Owen Van Natta said yesterday at the conference. They have a plan to move forward focusing on what they believe they’re good at, socializing content, which will be music-heavy thanks to their deals with the music labels.

In the audience question part at the end, TechCrunch editor Michael Arrington got up to ask Miller specifically about the sale of Photobucket, which we first reported on, but News Corp. has yet to confirm. Miller laughed, but said “No, I can’t make that announcement here.” That of course implies that they will make the announcement at some point.

Miller acknowledged that Photobucket is right in the middle of an important business decision for News Corp.: Are some of their assets stand-alone products, or part of the bigger picture? “It will be resolved shortly, but not today,” Miller said.

From what we’ve heard, MySpace is going to sell Photobucket to Ontela for a deal valued at $60 million, which is a huge markdown from the $250 million (plus a $50 million earn-out) that MySpace paid for the company in 2007.

Below find my live notes from the Q&A (paraphrased):

JB: What do you make of this whole rodeo around Twitter?

JM: I think it’s great. Search had been out of the socialization of the web thing, now it’s in it. It’s also clear that we have a lot of competition. It’s great. It’s not a one-horse race. Microsoft is hanging in there (in search).

JB: What’s it like to work with Rupert Murdoch?

JM: It’s fascinating. He’s so curious. He wants to know everything about everything. No matter what it is. He retains his ambition. He’s as ambitious as anyone I’ve ever met.

JB: What’s your job? What does it involve?

JM: I’m Chairman and CEO of the Digital Media group. I do two things really: One, I’m the executive in charge of a lot of businesses like MySpace. The other role is to provide strategy and guidance for the entire corporation.

JB: How do you split your time between those two? Thoughts on all this media stuff?

JM: Rupert feels there needs to be a paid content model – that doesn’t mean there won’t be free as well, but that’s our stance. There will be free and paid, but there will be paid. I spend half my time in that world trying to figure it out.

JM: That’s a hard way to do it. You have to offer value to the users. It has to be different from the free area. It’s not just throwing a pay wall. Wall Street Journal is working with that model. You can walk and chew gum at the same time.

JB: So that works for the WSJ, but they have a fat wallet audience.

JB: Why leave what you were doing?

JM: I was having a good time and we were investing in a few key areas. One big one was online video. That was fun and focused. But I was given the opportunity to work on a larger scale with more difficulty. I’m a glutten for punishment.

JB: The idea was that you were going to have to “fix MySpace,” right? Owen was here yesterday laying out the plan. How is it going? How do you know it’s working?

JM: Fix isn’t the right word. Nothing was broken that we’re putting it back. You have to think ahead. I don’t want to be in the catch up game. We need to get the essence of what MySpace is. It’s about making contacts, we’re getting back to that. The social part. Look at the big picture, then focus it down. Music announcements are core.

There was some stuff that needed to be fixed. You need to stablize loss of traffic. It’s been a combination of organic loss of traffic and cleaning up the service. We’re stablizing it, but it’s not the fix game. We need to do new and different.

JB: Rupert got a lot of credit for making that investment at the time. Is he upset for how it has gone?

JM: It’s fascinating. I didn’t think it would have been what it is now. But the question is: Where does it go? They’re smart to be an open platform. The money question is easier, I think. Their new deals are interesting, but it doesn’t take you to a billion valuation. Are you your own thing or are you a sub-category of what Facebook is doing? That’s the question.

JB: Is News Corp. a buyer in this space right now?

JM: We did just buy iLike. It’s strategic. We’re not just trying to go after cool businesses, it has to be about our strategy. That’s a music focus with iLike. We’re not just investing.

JB: What are the key strategies?

JM: Generally I’m obsessed with realtime. I have been for a long time, even when I was with AOL. I didn’t know it back then, but now you can really see it. Twitter is one level, but it’s beyond that.

Another interest is global. I just returned from Asia – it was really eye-opening. As we heard from Mary Meeker, the mobile world over there is amazing. They have things over there that compete with the iPhone. The mobile Internet is huge over there. We’re actually behind over here. It’s a huge transformation.

For MySpace music and games. It needs to start with an “M” a “G” or an “E”. We need to open our platform more with MySpace, like Twitter is doing.

JM: Most people in the audience would know the biggest ad networks, but not the #5 one, which is us. We’re moving up. We want to be #4. A deal with Omnicom helps us big time. It’s a real-time bidding network, advertisers can buy directly in to this huge network. They can buy a huge audience. It’s giving that power over to the buy side. It’s the beginning of a coming out part for FAN. Display advertising is coming.

JB: In display publishers feel threatened right? You can reach through the brand and grab an audience. Is that a problem?

JM: Yep. I think it’s a real change. There will be a premium world that will command high CPMs. Hulu can do that. It’s a true premium buy and a great expereience. Then there is the cheap inventory that can go to a broad audience. I think FAN can help with that. But the middle will get squeezed. You have to be premium or bulk. It’s hard in the middle.

JB: How’s it different from what’s out there.

JM: Along with a move to display, it’s a move to exchange. FAN uses the social networking environment. People tell you stuff freely through these networks. We’re not doing profiles, but it’s audience, to be clear.

JM: You can spread that across the web.

JB: Let’s go back in time a bit. As the former CEO of AOL, the new CEO TIm Armstrong – what should I ask him?

JM: That’s a good one. I’m thrilled he’s there. They need to get their freedom. I know they’re on track, but are they really. The freedom from Time Warner. That’s #1. It’s mutually felt, both want it. Is it on track.

Number two is how does the new content focus scale? Can you make enough of it in the model they have. The portal-based model.

The third, what’s happening in ad sales? Revenue is kind of important and AOL has a declining revenue and subscription base. So you need accelerating ads. It’s so key to that company.

Q: Is there a big opportunity for brands to do new things with all these social networking communities and sites?

JM: Absolutely. That’s what AOL has been doing with TMZ, leveraging the AOL platform. We need to start new brands, not just extend networks.

Q: (From Mike) Did you sell Photobucket?

JM: (Laughs). I’m confident that is Mike Arrington. No I can’t make that announcement here. But look, we’re going over all our assets, is it a stand-alone or does it fit? Photobucket is right in the middle of that. It will be resolved shortly, but not today.

JM: Twitter is about the assymettic relationship. Facebook is symmetric. MySpace is in between. We’ve had both in our history. We need to declare a major. Facebook is trying to be everything it seems. We’re more about interests of our users going forward, more than just the friend thing. I think we’re closer to Twitter. But we can be richer, I think. I don’t know if Twitter with change, but that’s how it is today.

JM: We need to have copyrights that are expected. Even in China they realize that. They have a budding content industry too. They’re very interested in copyright and piracy. I think we’ll have an Internet that respects copyright.