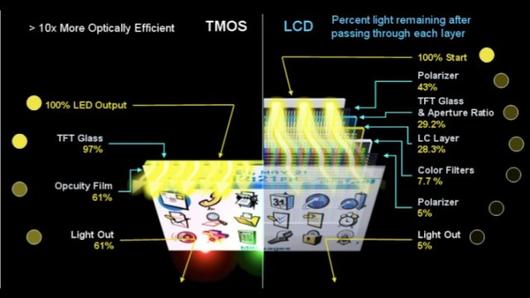 I believe that headline contains what’s known as a gaggle of acronyms. TMOS (time-multiplexed optical shutter) is a new display technology that claims brighter, thinner, longer-lasting, higher-resolution displays. Hey! I hear you giggling out there. “Yeah, I’ve got a bridge to sell you.” Okay, so extraordinary claims require extraordinary evidence. I’d say their pitch is somewhere short of extraordinary, but if there’s anything to the technology, it really may just be all that they say. The company and technology have been around for a while, but they’re actually approaching the market at this point and you might want to know something about it before you start seeing the name pop up all over.

The idea is that by taking out as many layers of the display as possible, you reduce light interference (increasing brightness), power draw (better battery life) and component number (allowing for more pixels per square unit). But what to strip out? Uni-Pixel, the people behind TMOS note that instead of having three dots per pixel (red, green, blue in varying intensity), you could just have one, but with the dot changing color so rapidly that your eye only perceives the aggregate color. I’m not going to get all neuroscience on you here, but allow me to just say that there are biological reasons both for and against this technology, which I’m sure Uni-Pixel is aware of.

Micro-mirrors would direct light from side-mounted LEDs, which sounds clumsy to me, but they say it’ll result in refresh rates far above current displays’. They would also be simpler to manufacture, more durable, and more flexible. Anyhow, the engineering challenges are serious, but they say they should be able to put one in a product in 2010. Guess we’ll just have to wait!