Short Version: Western Digital’s newest addition to its growing lineup of media players, the WD TV Live, essentially picks up where its older sibling (the great WD TV) left off. With the newly added networking capabilities via a built-in Ethernet port or USB Wi-Fi adapter (sold separately), the WD TV Live has taken Western Digital’s little black box to the next level. Be it photos, music, video (encoded with just about any codec under the sun), or the newly added access to YouTube, Flickr, Pandora, and Live365, the WD TV Live can handle just about any kind of media thrown its way. Overall, it is a highly capable, easy to use, and relatively affordable all-around high definition media player.

Long Version: The original WD TV HD Media Player was a great first attempt by Western Digital. Unfortunately, the lack of network and Internet access made the device less desirable to a large group of potential customers. Fortunately, WD seems to have listened to the growing community of WD TV fans while putting the new WD TV Live together and has added network and Internet connectivity features.

Although the WD TV Live is technically a new device, in reality it’s just a moderate overhaul of its aging sibling, the original WD TV. As such, I will try to focus more on the new changes than on the features that have remained the same.

Besides the newly added network and Internet connectivity, the most noticeable difference between the old and new WD TV Live is the actual color of the device. Where the original was clad in dust-loving, fingerprint attracting shiny black plastic, the new Live comes sporting an arguably more sleek, matte charcoal gray finish.

The device measures 1.57″ x 3.94″ x 4.94″ and weighs in at 0.67 lbs. It includes two USB ports (one on the side, one on the back), one HDMI 1.3 port, optical audio out, Ethernet, composite out, and component output. The included mini remote (below) is identical to the original version and the AC adapter is relatively small and self-contained (i.e. no power “brick”). Besides the remote and power adapter, the device also ships with composite and component cables (HDMI, optical audio, and USB storage devices sold separately). The WD TV Live is also compatible with various “universal” remotes such as Logitech’s Harmony series. 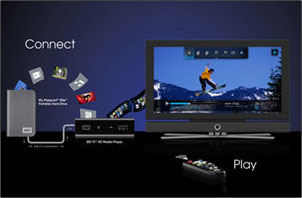 Installing the WD TV Live couldn’t be much easier (assuming you’re using an HDMI cable). Once you’ve attached the little sticky rubber feet to the bottom of the unit, simply plug-in the AC power adapter, attach the HDMI cable to the device and your HDTV, and insert any variety of USB storage (i.e. external hard drive or flash drive) into the side and/or the back USB port(s). That’s it. Now fire up your beautiful TV, hit power on the included WD TV Live remote, and voila…you’ve got an HD media player at your service.

Just like the old WD TV interface, the slightly updated UI is reminiscent of many media player apps (think Windows Media Center, XBMC, etc). Essentially, you are presented with a visual navigation system to choose between video, photos, music, and system settings. Instead of trying to explain all the various screens and options, here’s a not-so-brief (kinda unnecessarily long) video overview of some of the features:

One thing I forgot to include in the video is the new “preview” mode, which joins the previously included List, Thumbnail, and Search modes. The preview feature allows you to see a file’s info (such as size, type, etc) while also showing/playing a clip of the video, photo, or audio track. This is nice, for example, if your media files are poorly labeled or if you can’t quite remember which was the last episode of Arrested Development you had watched.

Another “oops! I forgot” feature is the newly added ability to copy, move or delete files between connected USB storage drives and/or networked storage/computers. This is really handy if, like me, your DVD ripping machine (i.e. your PC) resides in room X but your WD TV Live is set up in room Y; now you can simply move your latest media files from your machine to your attached USB storage right over the network (with some patience, especially over Wi-Fi).

As for compatibility, the WD TV Live supports the following (enormous list of) file types:

The WD TV Live is a definite improvement over its older sibling (the non-Live). If you are looking for an HD media solution that will play pretty much every type of media known to man (see the list above), has a very small physical footprint, network/Internet connectivity, and has limitless storage (i.e. its only limited by the amount of storage you own), then you really can’t do much better than the WD TV Live HD media player.

For those of you who love lists, here is a quick recap of all the highlights and improvements found in the new media player:

As good as the new WD TV Live is, there is still room for improvement. I’d love to see future firmware updates bring Netflix ‘Watch Now’ functionality, access to sites like Hulu, the ability to navigate by ‘chapter’ like on a DVD (with VOB, MKV, etc), and even some sort of Internet browser a la Opera on the Wii. In terms of future hardware improvements, it would be nice if the device had Wi-Fi and Bluetooth built-in, thereby providing an even better network/Internet experience and the ability to use a keyboard with the hypothetical Internet browser. And a physical on/off button built into the WD TV would be handy if you (temporarily) lose your remote (read: there are NO actual buttons/controls on the device itself).

Nonetheless, for $149.99 MSRP (or cheaper somewhere on the ‘Net) the WD TV Live HD Media Player is a highly capable and worthwhile addition to most anyone’s media center. One caveat: if you’ve already got a PS3 and/or XBOX 360 (I have neither), then you are probably one of the few who wouldn’t benefit much from the WD TV Live. In any case, with increases in speed, utility, and functionality, the WD TV Live is definitely a welcome addition to WD’s line of HD media players and a worthy successor to the original WD TV. For more, check out the new WDTVLive.com.