Anyone who has played though some of the more popular casual games on social networks like Facebook has likely come across ‘Offers’ — sponsored promotions you can sign up for or surveys you can take to earn virtual currency instead of having to pull out your credit card. Depending on the survey, these can be fairly time consuming, and sometimes it feels like handing over your Email will lead to a lifetime of spam messages. Today Gambit is looking to offer an alternative to these traditional offers: it’s partnering with TC50 finalist CrowdFlower to allow applications to offer bite-sized chunks of cloud-based labor to users.

CrowdFlower launched at this year’s TechCrunch50 with the intention of helping businesses outsource mundane or repetitive tasks that could easily be performed by just about anyone — things like filtering through images for material that is clearly copyrighted. Now companies will be able to sign up for a task on CrowdFlower and choose to outsource these tasks both to CrowdFlower’s established community, and to Gambit’s payment platform, which is used to power hundreds of games across various social networks.

Signing up for a task is simple. After clicking on the ‘jobs’ tab, users are presented with a brief overview of their task, along with an estimate of how long it will take. After you’ve completed your task, you’re rewarded with your virtual currency, provided you get enough of your responses correct. To check accuracy, the system presents the same task to multiple users and checks to see how many of their responses match. Businesses submitting tasks can pay more to ensure greater accuracy (in other words, their task will be presented to more users).

The new feature is called Gambit Tasks, and it gives gamers an alternative to the surveys and promotions they’ve been seeing over the last few years. These are especially appealing to gamers who don’t have credit cards, which can include younger users and some international audiences. Of course, with these younger and international users comes the concern of ensuring that tasks are performed accurately — CrowdFlower has a reputation system that trusts users less the more mistakes they make, which should help with this. It’s certainly a promising feature and Gabmit thinks it has a lower barrier to entry than other offers, which makes sense — I know I’d rather do a little bit of work than sign up for a promotion that I don’t really want. 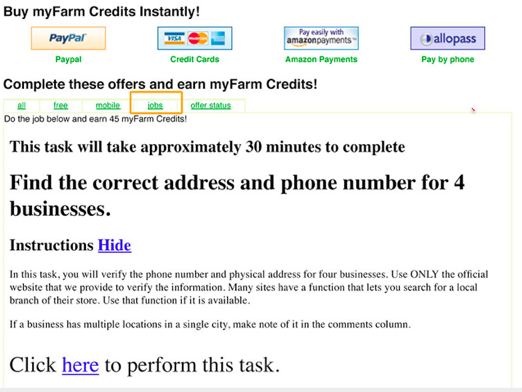