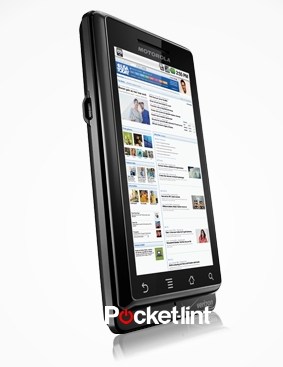 You’d think that when you’re about to announce something, you’d want to keep that hand away from the “GO LIVE ON ALL SERVERS ON PUBLIC SITE” button. It’s labeled very conspicuously. But apparently the new guy at Motorola didn’t know. So up went Droid, specs, pics, and all, for a few minutes. And as you know, a few minutes is more than enough to grab all the assets.

You can still see a remnant of the site (specs page), but the main bit with the pictures and all has been taken down. If you want to do a little URL hacking, be my guest, but it doesn’t look promising just now. Luckily, Pocket Lint and BGR nabbed some photos while it was up. What, I was eating dinner at the time!

Specs are pretty much what the rumor mill has been saying. I’m pumped for this phone, although I’m in the camp that thinks it’s ugly.