Update: Yammer is back! In a blog post the company explains that the issue was with a master switch.

Yammer, the Twitter-like short messaging service for business users, has been experiencing a prolonged period of downtime today due to DNS issues. The service first went down over 12 hours ago, was alive for a short period tonight, and then became unresponsive again a few hours ago. The issue is also affecting sister company Geni, who share the same DNS servers.

A look at the whois records for the domains shows that there are only two name servers assigned, and they are ns1.geni.com and ns2.geni.com – and they are both down. I wasn’t able to locate an IP address for the Yammer servers to test if the actual service is still there, but a query to the root servers shows that the IP addresses for the two name servers used by the domain are on the same netblock and are both down at the moment.

DNS is very fault tolerant, since it is possible to setup secondary servers that know where to find the answer to a query, and query responses are heavily cached all the way down to the local machine performing the lookup. There are a number of commercial services available that offer distributed DNS hosting along with advanced features, such as EasyDNS, who we use at Techcrunch (Disclosure: we use them).

We use and love Yammer at Techcrunch, and the product won the 2008 Techcrunch50 conference. We have become very accustomed to using Yammer as a replacement for a lot of internal email and Skype group chat, so we are almost lost at the moment without it. We can definitely sympathize with other Yammer users flooding Twitter with questions and complaints (Yammer has been very responsive to queries over Twitter, although has not confirmed a firm ETA on the service being back up).

Yammer is an enterprise service, being used my a number of corporations for internal communication. When Twitter goes down, we can moan about it and make do with not knowing what our friends are having for lunch. But when Yammer is down it has an effect on those businesses using it as a communication tool.

There are a number of emerging services taking aim at the corporate short-messaging market, least not Google with Wave and TC50 demopit winner Socialwok. For all of these services, factors such as availability and reliability are far more critical than with consumer oriented sites, and with the enterprise market these factors often take precedence over features or nice design. 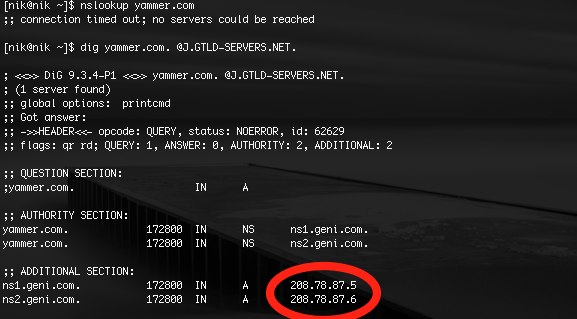