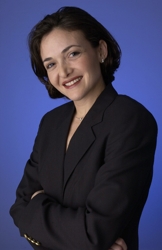 Sandberg also noted that Facebook sees a shift going on from an information economy to a social economy. This can be thought of a move from everyone just using Google to get information, to using social services like Facebook and Twitter.

She spoke at length about the importance of Facebook’s development community, both the Platform and Facebook Connect. She expanded on some data Facebook VP of Engineering, Mike Schroepfer, gave earlier, noting that Facebook now has over a million developers working on its platform. And 250 applications now have a least a million users each.

Sandberg alsp spoke a bit more about the new Bing deal, which Microsoft only mentioned briefly while announcing the Twitter deal. She made it clear that the data Facebook will share with Bing is only the data that users opt to make public.

She also noted that no money changed hand in the deal. “We’re not trying to make money on data,” she said. While Microsoft would not comment on the deal with Twitter, Microsoft’s Qi Lu did imply it was a deal that involved money changing hands.

Here’s a chart from Mary Meeker’s talk yesterday at Web 2.0 Summit that shows how time spent on sutes like Facebook is going up. 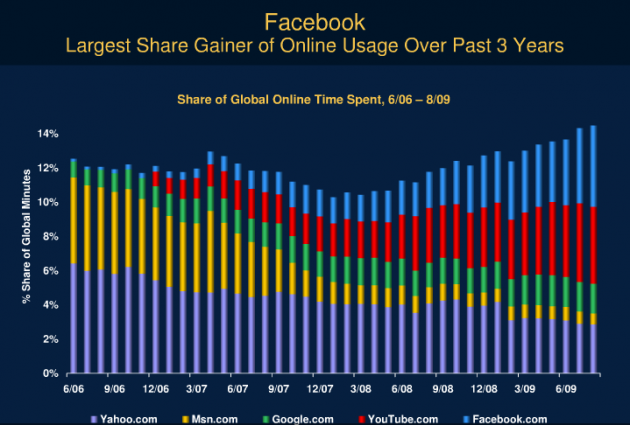 JB: So earlier we saw the Bing announcement, but we

SS: We’re announcing today that we’re working with Microsoft to give them a feed of our updates that are open to the public. In the Bing search results you’ll see all data that users make public.

JB: So when will that be in Google?

SS: Oh you almost got me. Nothing to announce at this time.

JB: So Facebook is profitable now. That’s something you must be proud of. How did you do it?

SS: Yeah we knew that was going to happen. We think the numbers are finally showing the promise of advertising on the web. It’s no longer a one-way communication that you blast to people. Facebook is where you are your authentic self of the web, and marketers love that. We’re not only profitable but cash flow positive as well.

JB: What’s the date of the IPO?

JB: How important have online ads been to scale the business?

SS: Really important, we’re international now with it. We sell directly and we have a platform, both are really important for it.

JB: It seems like the referral system is shifting. It’s not just about Google searches anymore, it’s Facebook and Twitter now. Did you notice that when you were still at Google? Is that why you shifted to Facebook? Should Google be worried?

SS: What we see at Facebook is that there’s a shift going on from information economy to the social web. Google will continue to be important, the search for sites, but we believe in the wisdom of friends. That’s how I learned not to take my kids to see Where The Wild Things Are.

JB: What about Aardvark which using IM and other things to answer questions? How do you manage the tension between the things you do in house between what the development community creates? Like Aardvark.

SS: The developer community is very important to us. We don’t try to build everything our users want to use. We do the core technology. We have over a million developers. 250 applications now have at least a million users each. We don’t care how people share using Facebook, it just matters that we’re the technology to connect.

JB: What is Facebook’s unique proposition versus Google or Microsoft in competing for the social graph?

SS: No cake is ever baked on the Internet – we have to be vigilant. Facebook is about where you are on the web. You put up your most personal information. We’re the only place that you can share with one person, just your high school friends, or the world. And we can scale, as Mike talked about earlier.

JB: Let’s talk about Facebook Connect. Give a quick overview. Is it now better than it was when it launched?

SS: It’s an extension of our platform. So if you’re on a third party site, you can log in there with your FB credentials, and share back information to Facebook. I used to have meetings with people who want communities on their sites, but every site can do that. We make it easy to add your friends which you already have on Facebook.

JB: How much more will you be able to do? Not everyone is my Facebook friend. Will the core Facebook funcitonality come outside of Facebook too?

SS: Our goal is to help you share the most you can both on Facebook and off.

SS: Not now. We’re asked that all the time, and it’s a good question, but we’re not focused on that right now. Right now we want Connect to be easier to use, an work with partners for deep integrations.

JB: Are developers asking for monetization through Connect? How do you keep developers happy?

SS: There are different types of developers and sites that use us. Some are big like Huffington Post or ABC News. ABC News used Facebook Connect when Michael Jackson died – users talked through Connect. It’s good for us and them. But it’s not about monetization, it’s more about making it easier to interact. On the Platform side, Mark Pincus/Zygna is a great exmple.

JB: Glad you brought up Zynga, they make their money through PayPal. Will you do your own payment system?

SS: There’s a lot of speculation about that, but I won’t speak to that. But we do have payments already on the site for buying ads, for example. We’re also allowing people to buy virtual goods with Facebook Credits. We’re doing testing with a few developers to take payments in their apps. That’s all I’ll say.

SS: Change is in the DNA of Facebook. That existed long before Twitter. We think Twitter is impressive – they’ve built something important. The world is shifting towards realtime sharing. When we launched status updates, no one got it. Now people are realizing Twitter is important. That’s a global movement. Like Evan said, there’s room for more than one player in that.

JB: The scale is really different too, right?

SS: We do 45 million status updates a day, from 30 million individuals. That’s a lot.

JB: Has the vision behind Facbeook shifted?

SS: I don’t think it has. It’s always been about helping people connect. Certainly we build new things that change the service. We’re evolving.

JB: So you were in the Treasury during the Clinton administration. How do you think the Valley is doing at having a conversation with D.C.?

SS: Silicon Valley is an amazing force for our country. We’re changing the world. I think our impact on policy is not as profound. Other industries are better at that. Globalization, immigration policies for us to hire, we as an industry have more to do for those things. They’re important for all of us – free capital and labor. We can do better.

Q: Aren’t you moving more in the direction of strangers with your changes?

SS: Privacy has always been at the center of what we do. Facebook allows you to differentiate who you want to share with. A lot of people, or just a few. And now you can share with the public. It’s all about user choices. They need to be more granular. Should this status update be for everyone, or just for my friends? We’re still working on it.

JB: Yahoo, AOL, and MySpace are all moving towards content. Facebook isn’t doing that now. Will that change?

SS: No, that’s not going to change. We’re about sharing, our content comes from users. We’re an important referer of content. We will not hire an editorial staff and do our own.

Q: Any advice for marketers who want to use Facebook?

SS: Do it quick and iterate. Facebook is much more iterative, it’s two way marketing. Make a Page and update it.

Q: Can you imagine a future where Google and Facebook work together?

SS: I can imagine a lot of things, but still nothing to announce. More broadly, are we working with lots of partners for sharing information? Yes. We have an open platform, we want to work with a lot of people.

Q: Does Google have to have an agreement to access your APIs? What’s with the Bing deal?

SS: The Bing agreement is giving them a feed of our “everyone” data. No money exchanged hands. We’re not trying to make money on data.

SS: We want everyone to use Facebook. It started in college, but we’ve grown quickly. The fastest growing group is over 35 now in the U.S. The great thing is that Facebook is personal for everyone.