Over the weekend Verizon unleashed its marketing campaign for its upcoming Motorola Droid smartphone, pointing out some of the iPhone’s biggest flaws on prime time television as well as on the website DroidDoes.com. The phone, which will be the first to run Android 2.0 and is sporting some heavy duty specs, may be a viable challenger to Apple’s iPhone dominance. Thing is, the Droid still isn’t officially announced yet, and we still don’t have a release date.

But we do have some hints: DroidDoes.com features a mysterious countdown timer that consists of a bunch of nonsensical symbols swirling by. Through some trickery (namely changing your computer clock or looking at the site’s config.xml file), it’s pretty easy to see what it’s counting down to. When the site launched on Saturday the countdown was going to October 30, 12:00 AM CST. Sometime today, that changed: the clock is now counting down to October 28, at 12:00 AM CST. Or 48 hours earlier than it used to be.

Of course, it’s possible that October 28 is the day Verizon is going to actually announce the phone, with the actual release coming a bit later (remember, the “Droid Does” ad ends by saying it comes out in November). Or maybe we’ll be holding this thing two days earlier than we thought.

Update: We’ve heard from a tipster who claims to have knowledge of the launch that Droid will be released either November 6 or 7. We’ve been hearing similar rumors before so this is certainly plausible.

Thanks to Christopher Daggett for working this out. 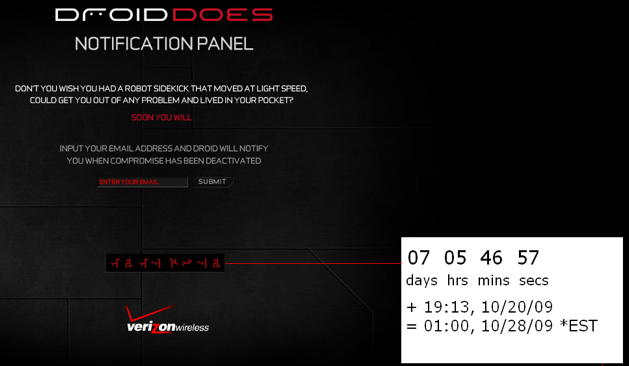