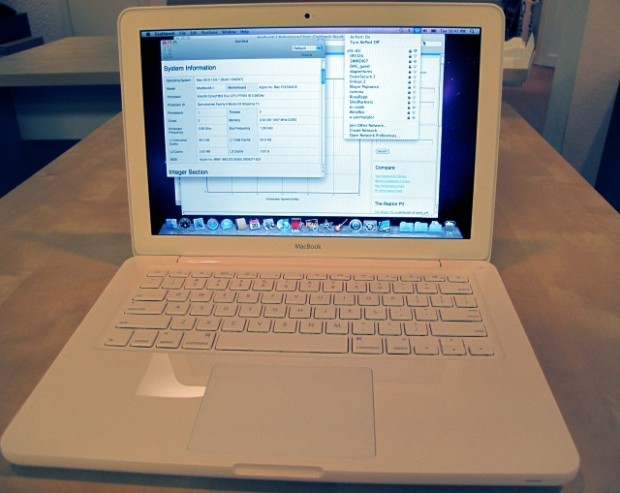 For weeks – months even – analysts have been telling Apple to make a netbook for the masses, a $299 junker designed for those who surf the web on the couch, their Cheeto-stained hands scrabbling for the TiVo remote while they incessantly refresh Reddit and hope against hope that their Craigslist Missed Connection emails them back. The Air, they said, was too expensive, designed for the frou-frou quiche-eaters of Silicon (V)alley while the MacBook Pros were too overpowered for the likes of Flyover Sally and her sad-eyed brood of younglings. They needed to sell something to the masses, something solid, American, and corn-fed.

Well, now Sally, the quiche-eaters, and the Cheeto dude – and the rest of us – have the new MacBook. It offers a bit less power and peformance than the Pro line, a little more of the styling of the Air line, and sells right at $999, a magic marketing number that is neither North of $1000 (before taxes) and South of corporate financial suicide.
[UPDATE – Added battery test.]

I recall in about 2003 when Wal-Mart first breached the thousand dollar mark in a laptop, a defining moment in the marketing of laptops. With the advent of cheap networks, that mark is now, in short, the high water one while sub-$500 is the norm. The breach of a $1000 meant that manufacturers had to cram cheaper hardware into cheaper cases in order to turn a profit.

Apple never went that route and for good reason. By selling lots of cheap netbooks for no money, big manufacturers like HP and Dell could squeeze profit out of a tight market. Apple, on the other hand, squeeze profit out of a constellation of products, iPhone included, and they hope that the social, societal, and mental pressures to make the earbuds match the laptop are enough to make people switch. For the most part their plan is working.

Designed for students and entry-level users, think of this model as the Mac Mini of laptops. The new design is quite smooth with rounded edges on the bottom – the old model was squared off – and an internal battery thart can hit about 7 hours on one charge. The ports were slightly changed in this model with two USB ports, a DisplayPort, and a combination headphone/line-in jack. The laptop also doesn’t have an IR sensor, presumably because you can now control iTunes with the iPhone or Touch. There is also no Firewire port. From an aesthetic standpoint, the battery/active light on the front which winks playfully through a slit in the metal in MacBook Pros looks like an accident on this model. Apple made it large and brooding rather than thin and charming and it seems like the materials limited their design choices.

Geekbench maxed out at 3258 (the 2008 models hit about 3139) thanks to a 2.26GHz Core 2 Duo CPU and 2GB of RAM. This is more than acceptable for most users considering a new MacBook Air clocks in at 2762. The battery lasted for five full hours of video playback with wireless on. I noticed that the bottom of the laptop stayed cool throughout the test.

The large, spacious trackpad is just like the MacBook Pro’s and seamless aspect of the build ensures there’s little to break in a backback or laptop bag. A few caveats: there is no external battery indicator and the bottom panel can be removed but the battery, technically, cannot be changed by mere mortals.

Another caveat is that this thing will get dirty and scratched almost immediately. Polycarbonate is not related “carbonite” or “polyadamantium” – it’s related to plastic. As such, your beautiful white MacBook will soon be a beatiful gray MacBook if you’re not careful.

Obviously you get Snow Leopard with this version and it comes with a power supply, longer power cable, and little else. For example, this model does not include the remote although included remotes seem to be extinct allowing Apple to charge $19 for the new remote.

Bottom Line
This MacBook is not for everyone. It’s a great addition to the MacBook canon, an effort to appease the analysts with an entry level laptop, but don’t ever expect something like this to drop past the $500 mark. Apple doesn’t deign to play in those muddy fields, leaving that to the PC makers in their race to the bottom.