I follow a lot of people on Twitter, so I understand when people say they sometimes get tired of mundane messages from people they often barely know in person.

In particular, the amount of coffees one has in the morning, what he or she is having for lunch, which airport terminal they’re currently waiting for a plane in and why their relationships are complicated are often of little interest to people following you on Twitter, besides maybe your parents. (Yes, I plead guilty too)

But the latter category of tweets now at least have a dedicated home with the launch of Relatious, a micro-blogging community site for people who enjoy sharing every little detail about their love and/or sex lives.

This excerpt from the news release captures the essence of the site:

It’s a place where anyone old enough—or young enough—to have a crush, make a commitment or suffer a breakup can share all their relationship news. You can rejoice in your romantic adventures (or lament about your misadventures), dispense advice to your lovelorn peers, or seek advice about everything from dating to divorce.

So there you have it. It’s Twitter, but for relationship chatter, although I’m a bit unsure how to plan to stop people from talking about whatever they feel like. Oh, and messages can be 400 characters, not 140. Oh, and you can share information anonymously, which means the message will still appear in the public feed but without your account attached to it.

Little more to add about the service, except that it was built and funded by a team of entrepreneurs who’ve sold Internet startups in the past and asked to remain anonymous for now. One thing is sure: they’re funny. Just check the copy on the ‘About us’ page and the last e-mail address on that page to see what I mean. 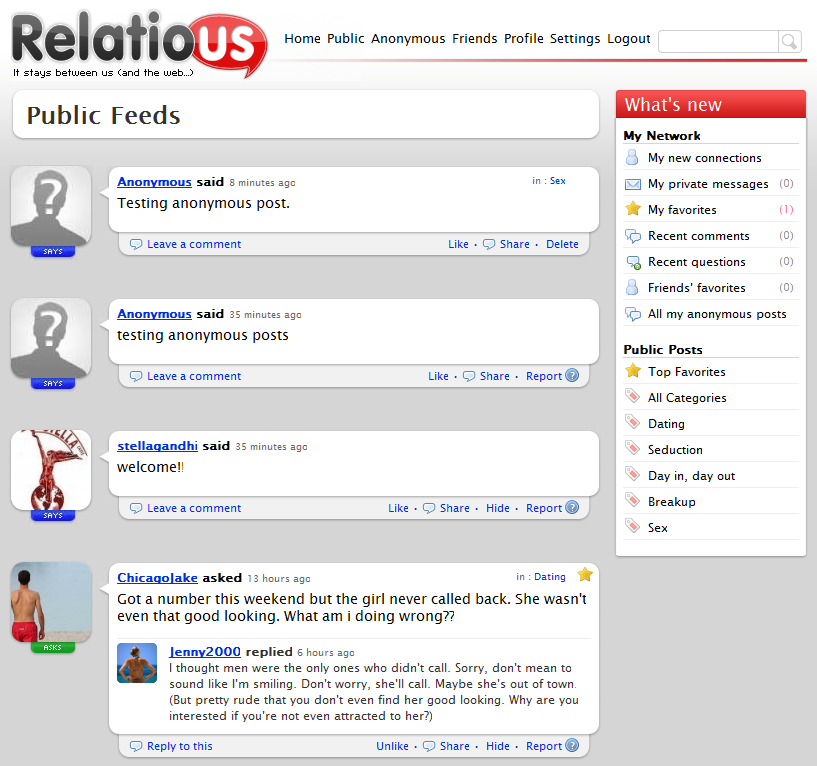