We know the music industry is stuck in a tailspin. We’ve beaten that issue into the ground. But more alarming than the death of records labels, is the continuing degradation of musical mediums. We’ve left behind wax cylinders, records, and magnetic tape to embrace digital conversion, Compact Discs, and MP3s. Quality exchanged for convenience. If this trend continues, we’re going to get to the point where we can upload an entire compilation of all the music that has been made, that is being made, and will be made, directly into our brain stems, Matrix-style. But it’ll sound like crap. 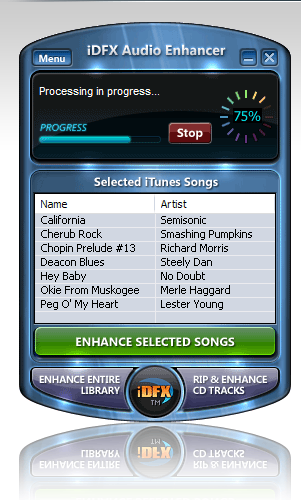 MP3s and other “lossy” audio codecs work by getting rid of data that is considered unimportant. Basic audio theory: Higher frequency = smaller waveforms. Thus, higher pitches have much more waves, meaning more data, than lower pitches. Human hearing doesn’t go higher than 20kHz, and even then, there aren’t any instruments that go anywhere in that range. So the creators of MPEG-1, Layer 3 encoding had a stroke of genius. If you have a range of frequencies that adds tons of data, but people can’t even hear it, why keep it?

iDFX Audio Enhancer is an add-on to iTunes that serves to, “re-encode your current MP3 and AAC files using a patent-pending method that repairs the damage and lost harmonics that occurred during the original encoding process”. Sounds like doublespeak to me for a $40 EQ and extrapolative guesswork. And the demo of iDFX sounds like just that. if you want good sounding audio, stop buying MP3s. And if you want smaller file sizes, start compressing with FLAC, Ogg Vorbis, or any number of lossless codecs.