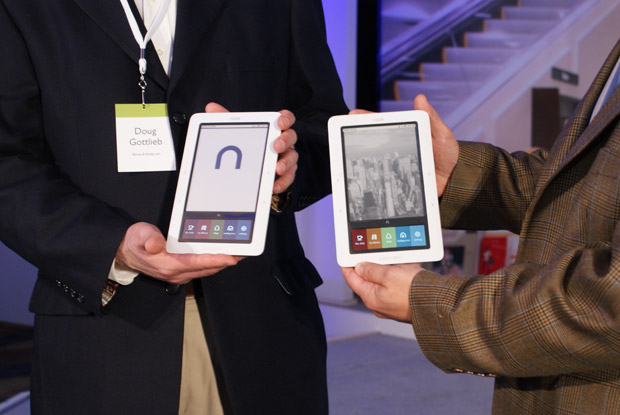 Not that every media outlet on Planet Earth doesn’t already have all of the details, but Team CrunchGear (Jimin and I… we’re right up there with The Mega Powers) is here at Barnes and Noble’s big reveal here in New York. Technically, we’re at Pier 60 right along the Hudson River. Not that you care.

Seeing as though we’re not live, I thought I’d offer my take on what’s going on. Jimin is on pics, so full props to him for bringing a camera.

First impressions… well, they’re playing what I can best describe as Chicago house music. And there’s all sorts of blue mood lighting. It’s a very festive atmosphere, and with good reason: e-books are the future, so they say, and if Barnes and Noble screws this up, and cedes any more ground to Amazon and its Kindle, well, yikes. Early indications, however, are that the Nook won’t stink on ice. Silly name, but what are you gonna do?

OK, Barnes and Noble CEO Steve Riggio is on stage. Just thanking people for coming, talking about BN’s history, etc. Nothing too crazy. He notes that the book industry is still bigger than Hollywood, video games, music, you name it. Reading in between the lines: please stop saying books are dead.

The president of barnesandnoble.com, William Lynch, is now on stage. Again, thanks everyone for being here, especially the book publishers. All the big names are in the house: Simon and Schuster, etc. He basically talked about the Web site’s effort to make it easy for people to find and buy e-books. Having bought several BN e-books, I can say it’s easy, sure, but not as easy as Amazon’s. In Amazon, the same search bar searches both dead tree books and e-books, while on BN you need to click the e-book tab or e-book drop-down to search for e-books. That is, you can’t, say, read the description and reviews of a dead tress book and then buy the e-book from the same page. He says consumers were looking for a “fun, easy to use” e-reader. 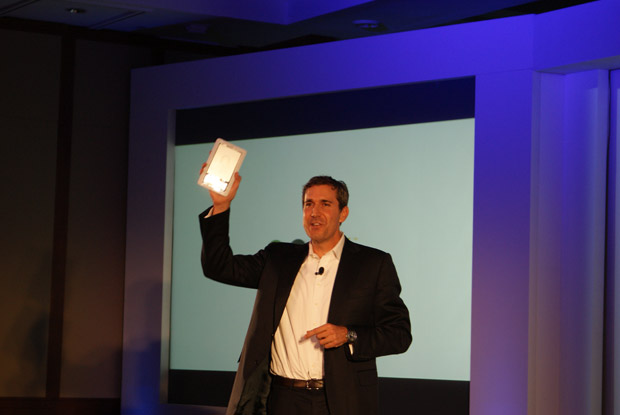 A video package plays, describing nook . (Note that the typeset for nook is all in lower case.) It touts the “crisp clear display.”

Lynch is now holding the nook, and everyone in the audience claps really loud. Like, it’s a really big ovation.

And now the design guys are on stage. They highlight the color navigation panel that’s at the bottom of the reader. They talk about how easy it is to search and type with the virtual keyboard, noting that the color panel goes dark when you’re not using it.

Rattling off specs: E-Ink, 16 shades of grayscale, PDF support, MP3, free 3G provided by AT&T (isn’t AT&T the one who’s complaining about their 3G network being overloaded as it is?), Wi-Fi, etc. By the way: there’s no Web browser, and you can’t buy the nook anywhere else but BN and its Web site. LendMe is what BN calls the ability to trade books with your friends, you can lend ’em for up to two weeks. Malcom Gladwell, author of The Tipping Point, read about two sentences of his book in stage. They emphasize that you can read your e-book not just on the nook, but on your iPhone or BlackBerry as well. In case “you’re stuck on a bus” they say. Fair enough. Lastly, they talk about all the accessories you can buy.

William Lynch is back. Can I say that, so far, this has been an absolutely perfectly paced press conference. Nothing is dragging on, and yet all the bullet points have been hit. Well done, gents.

On sale this holiday season, shipping at the end of November, at all BN stores, $259. But you knew that already ;-) 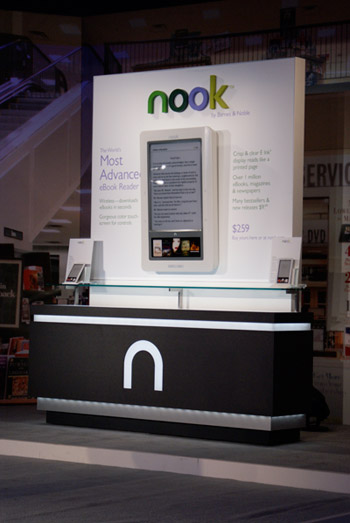 And that’s it. Lynch thanks his team for all their hard work, etc. They play one last video on the Titantron, then everybody leaves.

And by the way, that’s as close as they let us to the device. There are no nooks here for us to play with. Sorry~!