Kosmix, the reference engine that dynamically generates comprehensive topic pages as soon as you search for them, has just acquired a small startup called Cruxlux. Cruxlux has spent the last two years building an engine that can take any two people, places, or things and tell you how they’re related. Terms of the deals were not disclosed, other than that that it was in both cash and stock.

If you’re a fan of the classic game ‘Six Degrees of Kevin Bacon‘, you’ll love the Cruxlux engine. The company has built algorithms that will automatically figure out how various people, places, things, and topics are related through a handful of steps, using sources across the web. Say, for example, I wanted to see how TechCrunch is connected to President Obama: the site first says that TechCrunch was founded by Michael Arrington, who is connected to Stanford Law School (he went there). That in turn is connected to Harvard Law School (they both use non-letter grading systems). Which brings us to Harvard Law School, which Barack Obama attended. With each step, the site has a ‘how’ feature that tells you how the subjects are related.

Cruxlux has been in private beta until now, allowing you to type in any two topics to see how they’re related, and I’ve had quite a bit of fun playing around with it. Unfortunately, it isn’t going to be opening up to the general public, at least not in its current form. Instead, the service will soon be integrated with Koxmix, helping surface new connections as you browse through the site’s topics pages.

And really, the integration makes perfect sense. In its current form Cruxlux seems best for entertainment, not research — how often would you really take the time to plug in two topics to see their connections? Now that the relationship engine will be integrated with Kosmix, it will be much more useful, because they’ll be shown alongside every topic.

Cruxlux was founded in 2007 by Guha Jayachandran and Curtis Spencer, who met while they were students at Stanford. 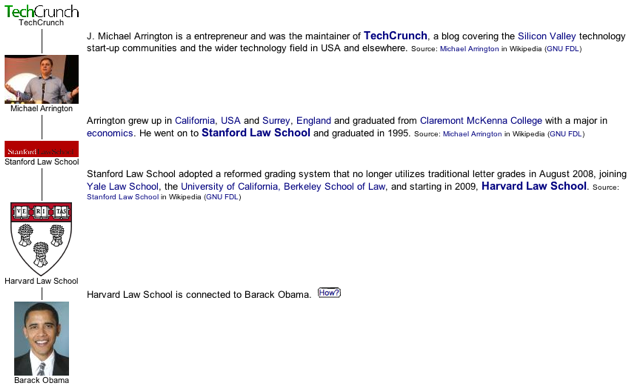