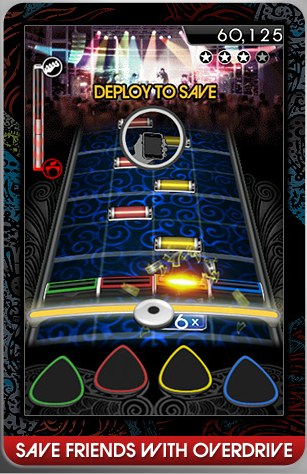 The much anticipated and hyped Rock Band for iPhone and iPod Touch is out! We first scooped the news of the launch of the app a few weeks ago. Shortly afterwards, Rock Band for the iPhone/iPod touch was officially announced by Electronic Arts. The app costs $9.99 and can be found here.

The game features a multi-player mode (via Bluetooth), allowing up to 4 players to rock out on the go. While you can also play via single-player mode, you can use the integrated Facebook Connect to invite your friends to join in.

Rock Band for iPhone allows players to choose between vocals, drums, bass, or guitar. The game involves tapping the screen on the correct notes and the vocals are also performed through tapping (as opposed to singing). The app features 20 tracks from a varied list of artists and musicians (see the song list below). The app has premium content that can be purchased via an in-game store. Rock Band also includes an in-game message center to check your band’s status and will have push notifications when friends invite you to rock out.