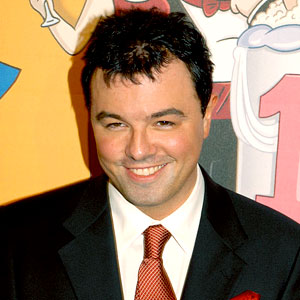 “I won’t be happy til the whole world hates me.” Not my words, for once, but those of Seth MacFarlane on stage last year at Carnegie Hall. The audience laughed, as well they might (“he was on the Internet and I’m in college”) , on the assumption that their hero was joking. And yet, and yet…

On November 8th at 8:30pm, viewers of Fox in the US will watch in horror as the network gives over thirty whole minutes of airtime to a Windows 7-sponsored episode of Family Guy.

Just take a moment to let the horror of that fact settle in your brain. Multi-millionaire Seth MacFarlane – who, by the way, uses a Mac – has decided to sell the soul of his flagship show to Redmond. For money.

Of course, producing art to order is always a tricky call. Back in the 16th century Michelangelo was quoted as saying “One cannot live under pressure from patrons, let alone paint,” and yet even he was forced – from time to time – to succumb to the pressures of paying the rent.

In his painting ‘The Conversion of Saul’, the face of Saul (who would have been around 30 when he took the road to Damascus) is replaced with the far more elderly face of Pope Paul III. Why? Because Pope Paul III was the pontiff who commissioned and financed the work. It was a tacky move, sure, but changing the facial features of one character (whose true appearance is conjecture anyway) is still a light year away from letting your sponsor dictate your entire storyline.

We’re fortunate that Michelangelo didn’t share MacFarlane’s principles. If he did, then visitors to the Pauline Chapel today could gaze in awe at a masterpiece entitled “Saul’s Conversion To Realising How Freaking Awesome Paul III Is” – a masterpiece which would almost certainly feature a cutaway joke about the 16th century equivalent of the old man in Family Guy who chases young boys. Or ‘Michelangelo’ as he was known in those days.

Watch this MacFarlane-voiced preview clip from Microsoft and you’ll see what I mean – in it we see Brian rehashing a horribly meta Family Guy joke (presumably because hardcore fans are the only ones who will still be watching) while Stewie puts “Windows 7 through its paces”. After listing the many splendid features of the sponsor’s product we discover what Stewie is actually doing with Windows. He’s using Twitter… to tweet the words “I’m using Twitter!”. Awesome!

No, not awesome. That other thing.

But to be fair to MacFarlane, there are two ways to assess his culpability in this abortion of a judgment call. On one hand you might call him a sell out – a whore whose relentless pursuit of even greater wealth, despite already having a contract with Fox worth $100 million a year, has lead him to throw his credibility – along with Peter, Lois, Brian, Stewie, Chris, Meg et al – under the bus.

Alternatively, one might be more charitable. One might call him an idiot – a man who didn’t realise that accepting $100 million of Fox’s money would oblige him to watch impotently as his credibility, Peter, Lois, Brian, Stewie, Chris, Meg et al were thrown under that same bus. Either way, they’re under the bus, and it’s his fault. Youa culpa, Seth.

But while Seth MacFarlane is obviously the most guilty party here, you also have to ask yourself what on earth Microsoft’s marketing geniuses are thinking. I mean, when you’re watching that clown getting a handjob from a banker, the only person you feel less warmly towards than the clown is the banker. Precisely how gullible does Microsoft think its target audience is? So gullible that we’ll sit through thirty minutes of unfunny Windows-plugging bullshit and still be left believing that Windows 7 is a brand (urk!) we want to align (urk!) ourselves with? That’s the kind of dumb thinking that MacFarlane would gleefully would parody in a cutaway, like the one in which he blamed Jim Henson for wrong sounding Muppets: “it’s like that time Microsoft sponsored Family Guy and hoped no one would notice the difference”.

But, hell, there’s no sense in getting too worked up about half an hour of Family Guy murder. Every show has its shark-jumping moment, and with millions of dollars in the bank and American Dad getting consistently edgier and funnier, MacFarlane probably isn’t too worked up either. “Meh, let it die; I’ll bury it under this enormous pile of money in my basement, next to whoever wrote the scripts for The Cleveland Show.”

Really the thing we should all be worried about is that Microsoft Guy could be the start of a trend, not of product placement in television – that ship has sailed – but of entire shows being rebranded at the whim of technology companies.

This month the BBC reported that spending on online advertising in the UK has finally taken over from television advertising for the first time. The UK is the first major market where it’s happened, but other European countries are close behind and it’s only a matter of time before it happens in the US. As technology companies see their coffers swell and poor old television is forced to scramble for every available pound, euro or dollar we could be heading for a point where the only way television can survive is if every single show is re-written to promote a huge tech brand.

You think I’m paranoid. Of course you do. And yet I’ll take almost no pleasure in telling you I told you so when America finds itself subjected to shows like…

This is your future, Seth. Wokka wokka – who wants to hear a funny ass joke?