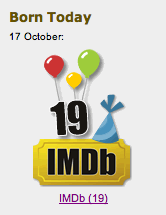 If you load up the Internet Movie Database (IMDb) today, you’ll see a new logo commemorating its 19th birthday. Yes, that’s really old for the Internet. Google, by comparison, is 11. Meanwhile, Yahoo is 14. IMDb is so old in fact, that is pre-dates the first web browsers. How?

Founder Col Needham explains the history a bit in a birthday message today. IMDb was born on October 17, 1990 as a series of Unix shell scripts to let users search the USENET group, rec.arts.movies. It wasn’t called IMDb yet (that came four years later), but it was the beginning of being able to search for movie information on the Internet.

Once the web as we now know it sprung up around the IMDb, the site became hugely popular — it’s probably the first website that I remember being addicted to when I was young. The site became so popular that its founders realized they would have to start charging visitors if they wanted to keep it up (remember, this was the mid 1990s, Internet advertising was much, much smaller than it is today). But in 1998, Amazon came along to buy the site, enabling it to stay free for users. Though they would later add IMDb Pro, a subscription-based section with more data on movies.

They’ve also added new functionality to the site over the years. This includes the ability to play video content (which is ho-hum), and the addition of the excellent movie box office tracking site, Box Office Mojo.

IMDb says it now gets 57 million people coming to its site each month. I still can’t believe that it’s nearly as old as I am.