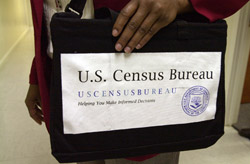 We’re stretching for stories today, believe me. Hence: it’s about time we update the way we conduct the U.S. census. Someone else said that, not me. Like, don’t you think it’s a little quaint to go from door to door, with a pen and paper in hand, and ask, “Hey, um… how many people are you? Did you go to college? Do you have a job? Cool, thanks.” Why not, you know, make use of electronic records, recognize that some people don’t have landline telephones and plan accordingly, etc.

Why do we need to update the way we take the census? Well, for one, there’s the pragmatic reason that, in its current form, the census just costs too much money. It cost $14 billion to conduct the 2010 census. $14 billion! To pay a man in a hat to knock on your door!

Two, the methods we use are patently outdated; we need to leverage the available technology we have access to a little bit better. “Such as?” Such as using the electronic records we already have on record rather than starting from scratch every 10 years; such as using fancy statistical computations to ensure that populations are accurately counted.

I don’t know, I thought it was interesting. We might as well be using the same methods that William I did 1,000 years ago in England.