Twitter has rolled out its new Lists feature to a larger portion of its user base right now. The feature allows you to group users you follow together and then lets you share those for others to also follow.

Setting up a list is simple. Currently, the homepage features a Lists banner that allows you to start simply by clicking on the “Create a new list” button. Once you do this, an overlay appears and you just type in the list name (which Twitter then converts into a permalink along the lines of twitter.com/USERNAME/LISTNAME), and set the list to be public or private. This is obviously an important distinction as the public one, others will be able to see, while the private one will be for your eyes only.

On the right hand column of you Twitter.com homepage, you will see a new “lists” area under you bio. Clicking on this will take you to your list overview page where you can manage your own lists, as well as see other user’s public lists that you are a part of. Also, on user profile pages you will see that the users’ lists are now listed under the “Favorites” area in the right hand toolbar.

Clicking on any of these lists will take you to a stream of just the users followed by that list. Basically, this is a filter, if used the right way. This is something Twitter proper has long needed (though plenty of third party services like Brizzly have stepped in to offer it).

Unfortunately, adding people to your list is not as easy as it should be. The reason for this is that there is no user search functionality. Instead, you have to either go to your “following” page, or to that person’s profile to manually add them.

A number of third-party sites and services were granted early access to the Lists feature, and have been working with its API to integrate the functionality into their services.

Much has been made about Twitter’s Suggest User List (Disclosure: We’re on it) and how it wasn’t a fair method of user discovery. These lists will undoubtedly help alleviate a lot of that strain.

Update: Initially, I suggested this was a massive roll out, it is not. As project lead Nick Kallen says, it seems that just a lot of people I happen to know were added. My bad, sorry to excite everyone. The feature is very cool though.

Update 3: Twitter also has a team list, which is following 108 people. That would seem to suggest that they may be over 100 employees already, which is more than they’ve stated recently. Actually, strike that, that list include non-employee contractors, Twitter co-founder Evan Williams has just informed us. 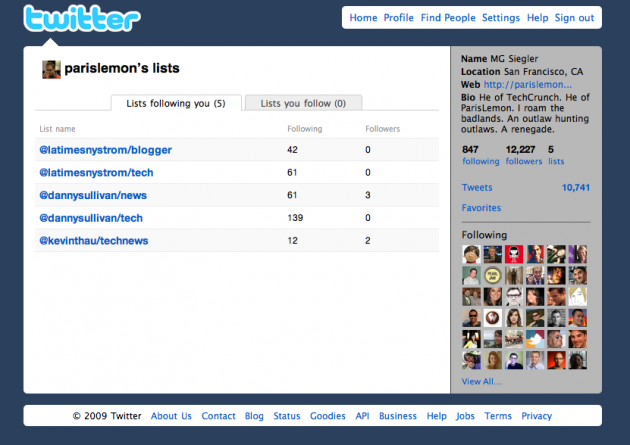 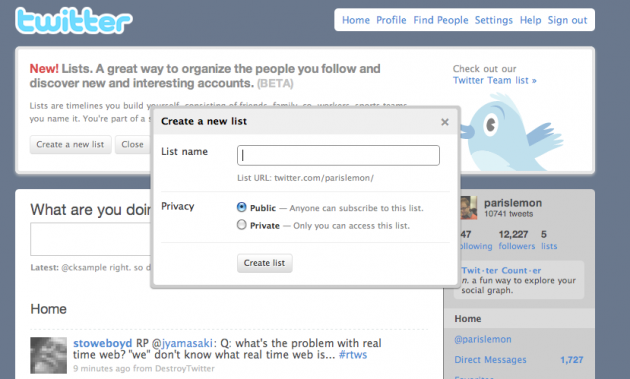 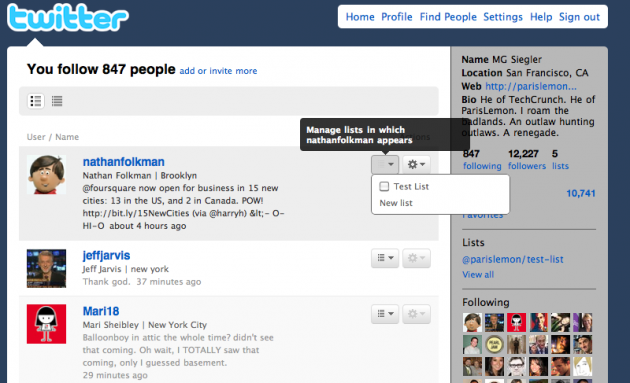