Yesterday, word got out of Apple’s new iFrame standard, which purports to expedite video editing by keeping the video in “the same format used on a computer.” Really, it’s nothing but a resolution and wrapper. So why am I losing my mind over it? Because the way iFrame is being positioned and propagated is misleading and harmful to consumers. Oh I know, what an alarmist, right? It’s just a video format! But with personal video becoming more and more ubiquitous and invading class after class of gadgets, these former trivialities are becoming more important by the day.

And for once, we are actually gravitating towards a couple unified standards in both encoding and resolution — and then Apple butts in with this ugly stepchild of a format.

Let me drop a few background truth bombs here first, and please do read this part, because it’s important, and math is fun.

Every new TV out there supports 720p. This is because it is related to the VGA standard 640×480, recently employed by Apple for its Nano and iPhone video. VGA is perfectly good. But it’s also 4:3, which is something we’ve been moving away from for a while. It’s getting hard to find 4:3 screens; the new standard is 16:9. So to make a VGA-related HD standard, just double the horizontal pixels (you get 1280) and extend it downwards until you have a 16:9 aspect ratio — 720p, or 1280×720, appears as if by magic. It’s a good size, a good standard, and perfectly easy to work with. Cheap camcorders can record to it, and until recently it was even used (with better equipment of course) by Hollywood. Then you’ve got 1080p, which is 720p extended by 640 pixels horizontally and 360 pixels vertically (640×360 is VGA reduced to 16:9). These formats were chosen for a reason.

So between VGA, 720p, and 1080p, you have provided for mobile/medium-quality, high-quality consumer, and prosumer video needs. Dueling legacy codecs and wrappers notwithstanding (video editor compatibility still isn’t there), it’s actually a pretty picture, so to speak. There are a few weird resolutions out there for sure, but they are for things like 8-inch netbook screens or professional digital cinema footage like that from a RED. For 99% of consumers, the three standards I’ve just mentioned are everything they’ll need for years (we’re sort of plateauing as Blu-ray and digital distribution duke it out). You can buy a computer for the price of the camcorder that will edit 720p handily.

Now perhaps you understand my consternation some time ago when I found that iMovie ’09 didn’t like to support the HD formats used all over the world. Sure, if you’re an expert you can get around the barriers they’ve put in your way, but the world isn’t full of experts and the result is that the average Joe’s footage gets re-encoded and he isn’t getting the HD quality he paid for. Fortunately, they fixed that and you can now export in true HD. So imagine my shock yesterday when Apple decided to pull an about-face and institutionalize this ridiculous limitation.

iFrame, and we can talk about the name in another post, sets in stone a size of video which has no place in this world. The idea is that it keeps the format homogenous from camera to editor. Really? Because that’s what all regular video editors do already. The only reason iMovie needs a special format is because of the limitations Apple placed on it. The size and workflow differences between iFrame and 720p are really not very significant. What’s my objection, then? I’ll tell you. Apple is ignoring the galaxy of products out there that already support a perfectly good format. Can you think of a single device, display, web page, or anything that has a 960×540 resolution? 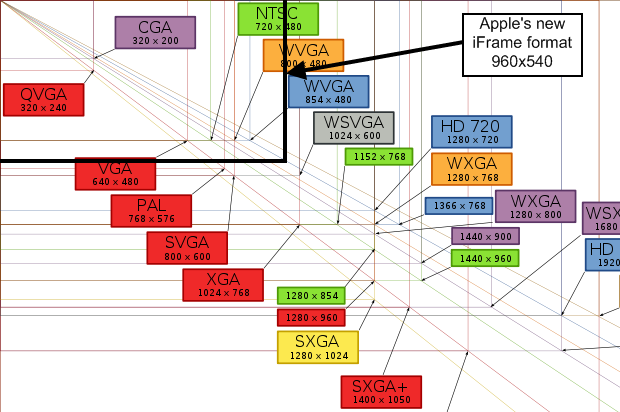 Your TV is 720p or 1080p. You’ll have to stretch the video to make up the difference, and despite what you’ve heard about upscaling (it’s nice), more resolution is always better for definition. The first cameras to support iFrame, from Sanyo, look great. They shoot to 1080p, will do 12FPS stills, super-slow-motion video, and are all-around decent camcorders. And yet they default to iFrame. Let me say that again. Thousands will buy cameras capable of (and designed for) shooting 1080p, and Apple will have them defaulting to shooting at a quarter of that resolution. Joe Consumer won’t question it, and he’s not getting his money’s worth. Besides, with all the choice currently available, and the devices already far too complicated for the average user to utilize fully, adding yet another option (and suggesting it’s better when it’s not) is just irresponsible.

And before your mouth starts frothing in anticipation of a 960×540 resolution iTablet, rest assured that’s not the case. They’d be foolish not to support 720p since they’re going to capitalize on renting out HD TV shows, which are broadcast in 720p or 1080p.

In the end, I’m forced to accuse Apple of pure egotism. While simply having a 960×540 resolution option is in no way an issue — it’s just a resolution, after all — it’s attempting to make it a standard that’s a problem. There is nothing better, or indeed much different at all, about iFrame, save that it is slightly lower in quality than 720p and takes up somewhat less space (even that is questionable, as cameras differ widely in bitrates). By emphasizing its own format, which is inferior to the existing and popular standards, Apple only solving a problem of their own creation. Instead of fixing iMovie to work with the world, they’re trying to change the world to work with iMovie. I guess that’s kind of how Apple does things, but still.

Oh, I realize this is a bit of a mountain/molehill situation here, but I couldn’t let this ridiculous move pass without comment, and video format lunacy is a pet peeve of mine (hence the disproportionate rant you just skipped over). As much as I love Apple, this is indefensible, silly even. Even if it’s only a sort of technical quibble, it indicates a serious lack of reality checking on Apple’s part.

Update: Charles points out that that 720p and 1080p are not, in fact, descended from 640×480, but were arrived at independently. Seems like a mighty big coincidence that they’re 2x and 3x 640-wide, but he has the math to back it up (literally wrote the book on this topic). Whether they are descendants or not does not figure into the rest of the rant, but I appreciate the fact checking nonetheless.