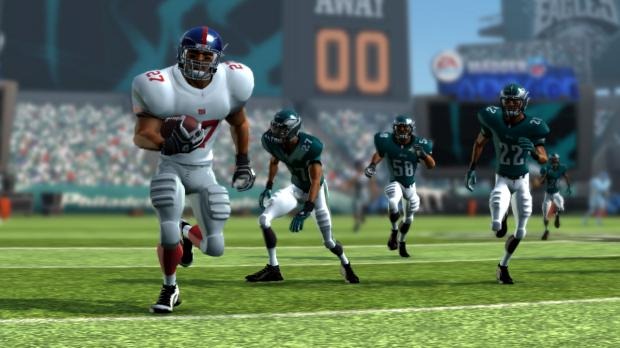 If you find the full version of Madden (see review here) to be too expensive, complicated, or both but you still long for the thrill and prestige of legally-licensed NFL players and teams, then you’ll be happy to know that Madden NFL Arcade will be here sometime in December.

It’ll be available on Xbox Live Arcade and PlayStation Network in downloadable form for $15 and will feature 5-on-5 action on a 60-yard field. Your team is given four downs, there are no penalties or field goals, and the first team to 30 wins.

So, yeah, not quite like a full game of the big boy version of Madden but this one should be far more of a pick-up-and-play experience. And, as is an arbitrary requirement for all arcade style sports games, there are numerous power-ups to use throughout the game: “Add an entourage of lineman to get the sack, freeze an opposing player, turn off your opponent’s passing icons, and much more. No lead is safe in Madden NFL Arcade.”

No specific availability date yet, aside from “just in time for the holidays in December.”

REDWOOD CITY, Calif., Oct 14, 2009 (BUSINESS WIRE) — Electronic Arts Inc. (Nasdaq: ERTS) announced today an all-new way to experience the Madden NFL franchise with Madden NFL Arcade – a fun, pick-up-and-play, 5-on-5 football game from EA Tiburon. Madden NFL Arcade is pure adrenaline football for both casual and diehard NFL fans, featuring a unique art style that brings your favorite players to life like never before! Madden NFL Arcade will be available as a download on Xbox LIVE Arcade and the PlayStation Store for 1200 MS Points and $14.99 respectively, just in time for the holidays in December.

“When you look around the office and see your whole team playing and having tons of fun with it, you know the game hit the right mark,” said marketing director Nathan Stewart. “We have diehard Madden fans who have worked on the franchise for a decade, and more casual gamers who are all playing together and enjoying it. If our productivity the past few weeks is any indication, we’ve created a game that everyone will love.”

Choose one of your favorite 32 NFL teams and distinctive home stadium for a battle with the best five players on each side of the ball, and let the excitement begin! Each team is given four downs to march 60 yards to pay dirt – no penalties or field goals allowed here, pal! Get your Madden NFL fix in a completely new way, with fast-paced games where the first team to 30 wins. Want to mix it up?Madden NFL Arcade can be tailored to fit your liking by changing options, such as skill level, points to win, and more; making each game unlike the one before. Take advantage of 13 unique “Game Changers” to break the game wide open on a single play. Add an entourage of lineman to get the sack, freeze an opposing player, turn off your opponent’s passing icons, and much more. No lead is safe in Madden NFL Arcade.

Madden NFL Arcade is the perfect video game for gameday, allowing up to four players to play co-op on a single console. You can also take on the world online in head-to-head matches and track your performance via interactive leaderboards. If you like to commemorate your gridiron success, Madden NFL Arcade will also provide a host of achievements and trophies to boost your gamer score.