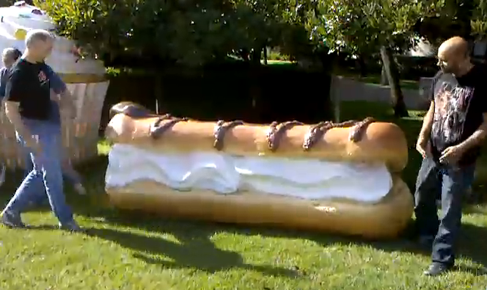 The Android robot that graces Google’s front lawn got a new dessert friend today: a giant Eclair, drizzled with some chocolate syrup. The Eclair now sits alongside two other over-sized confections: an enormous cupcake and an intimidatingly large donut. You can see a video of the upwrapping of the new treat below, taken by Android engineer Dan Morrill according to Androidandme.

The dessert trio is, of course, a product of Google’s quirky sense of humor: each Google Android release has a dessert codename (Cupcake was 1.5 and Donut was 1.6, and Eclair is 2.0), and the Android team puts out a new giant sculpture to coincide more or less with the software’s release.

What that means is that we’re likely very close to seeing Android 2.0, codename Eclair, for the first time. Nothing’s for certain yet (Google hasn’t made any announcements), but when a Donut was spotted in front of Google back in September the developer release was out within a few days.

There have also been persistent rumors that Motorola’s Sholes phone (AKA Droid and Tao) will be making its debut by the end of the month, and that it will be the first phone to feature Eclair, so the timing lines up.

Also worth noting: the video below was taken by an Android phone, and given that this is the Android team we’re talking about it’s reasonable to think they’re testing out the latest-and-greatest. Looking good.