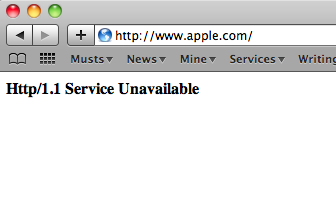 We’ve all grown accustomed to Twitter’s website going down. And even Facebook is often less than reliable. But tonight a big boy has crashed. Apple.com is completely offline right now.

While sites like Apple sometimes experience slowness, they rarely completely fail. Apple uses Akamai to serve the actual website and its content, and it was down everywhere, based on some tests we ran quickly. That’s fairly crazy, and likely points to a an original source server error not on Akamai’s end. But still, you’d think Akamai would have have a cache to serve rather than an error.

Let’s break out those conspiracy theories. I blame Twitter.

Update: And she’s back. Seemingly, unharmed.