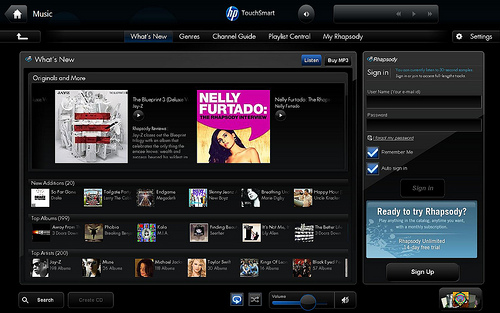 You may have seen a young man named Michael Arrington bemoaning the current state of touch technology on these very pages. While I tend to agree on the aggregate, I saw HP’s new touch line last week and came away impressed, at least in the quality of the interface HP built around the TouchSmart 300 and 600, 20 and 23-inch all-in-ones with touchscreens. Sony also dumped out some touchscreen Vaios in an event so-over-the-top that Mischa Barton was there (seriously!). OEMs are going touch-crazy.

But why now? Why touch?

This push for touch points to two things. First, we have the Windows 7 launch with some touch capability built-in. Like a proud parent, Microsoft wants to show off what its little baby can do and, as a result, rumor has it that it has forced OEMs to add touch to almost everything in their line. By pushing touch into the pipeline, Microsoft essentially ensures that it won’t face a repeat of the 2001 tablet PC debacle.

This push also comes from fear. If the Apple Tablet hits the streets this year, Windows 7 wants to be in the forefront of touch technology. By adding touch now, they can say they did it first and all of those laptop hunters can add one more bullet point to their arbitrary laptop wishlist (“I want good graphics, ummm, a keyboard, and ummm… lots of room for photos and a touchscreen.”)

Microsoft lost the mobile touchscreen war. They don’t want to lose the coming “desktop” war. While I have my own opinions on that, I will hand it to HP and Sony: their interfaces are gorgeous. The HP interface I saw last week has a number of simple tools – a recipe box, for example, that can take recipes from the web and import them into a private database – as well as the standard stretch’n’drag photo and note-taking applications that make touch actually compelling. Will you ever double-tap on “My Documents” with your finger? Probably not, but perhaps it’s nice to know you have that ability.

In the end, multi-touch will probably rule the day. Future-proofing is fine and more power to Microsoft for being pre-emptive this time. However, the fanboy in me says that Apple will redefine the space shortly and leave these experiments in the dust.