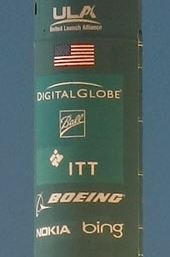 Quite often, we’ll write something positive about a company and will get an email from someone about a rival that they feel also deserves the same treatment. That’s normal, and obvious. But what’s really great is when we write something negative about one company, and the same people come out emailing us that a rival deserves coverage too.

Case in point: Last night, we covered Google teaming up with DigitalGlobe to be a part of the just-launched WorldView-2 satellite. We called this “mildly creepy” since Google is now gathering images of all of us from space on quite a few different satellites. But not to be outdone, we got pinged from someone who was upset that we didn’t note that Microsoft is on the same satellite as well. In fact, there was even a Bing logo on rocket that took the thing to space!

So yes, we concede that Bing is trying to be every bit as creepy as Google, though I still think Google has the GeoEye-1 exclusive deal. Microsoft fanboys: If you want your beloved company to up its creepiness, I’m sure there are deals to be struck with private eyes, or maybe peeping toms, that can out-sketch Google. Good luck.

Here’s a bit more about Bing’s deal with DigitalGlobe. It’s worth noting that they also have a contest to inspire students to learn more about rocket design and science. Okay, that’s nice, not creepy.