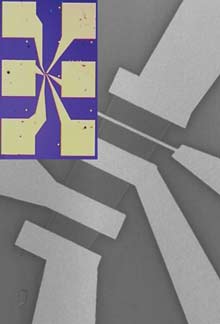 Graphene, as everyone knows, “is a one-atom-thick planar sheet of sp2-bonded carbon atoms that are densely packed in a honeycomb crystal lattice.” (Seriously, I didn’t just check Wikipedia for that.) Scientists have been using the material for lots of different applications for some time now. Recent work at IBM’s T. J. Watson Research Center has focused on using graphene as a photodetector, and it turns out that it does a pretty good job in that role.

Graphene is substantially faster than current semiconductors, which are made of a substance called III-V, which is comprised of gallium, phosphorous and other stuff. Not only is it faster, but graphene detects a larger spectrum of light, from the visible and the infrared. According to Technology Review, “That means that graphene photodetectors could work at extremely high frequencies, making them highly efficient at detecting light and transporting the resulting electrons to an external circuit.” Think flexible flat panel displays, thin solar panels, and the like.

Ultrafast photodetectors could find use in future optical communications networks with data rates beyond 40 gigabits per second; right now, optical networks have data rates of about 10 gigabits per second. The photodetectors could also be used in optical computers that compute with electrons but transfer data using light instead of sending it over heat-prone copper wires.

Thanks, Graphene-Info, your one-stop shop for all things Graphene! Bookmark it today!