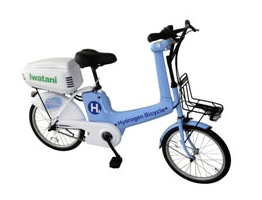 One thing is clear: Japan loves electric bikes. And now Tokyo-based Iwatani is presenting a model [JP] that’s powered by hydrogen. It isn’t exactly the prettiest vehicle out there, but the so-called Hydrogen Bicycle is ecological (it doesn’t emit any CO2).

Iwatani says the 31kg/156cm-bike reaches an assisted travel range of up to 45 miles. It uses hydrogen cartridges sold by the same company, but there’s also a lithium-ion battery (26V-4Ah) on board. Power will be supplied by the battery once the hydrogen in the cartridge runs out (the bike then switches automatically from hydrogen to battery mode). The carts have a volume of 80nl and need to be placed in a small tank behind the saddle.

Iwatani plans to conduct first practical tests at the Kansai International Airport near Osaka starting tomorrow. The company hasn’t said yet if the bike will ever be mass-produced, but has announced more field tests for the near future.