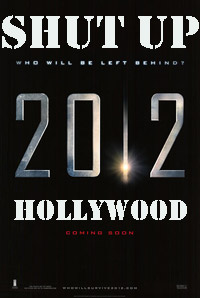 So we’re all in agreement: the movie 2012 is terrible, and we’d all be better off if it didn’t exist. What we should also acknowledge is that, no, the year 2012 will not, in and of itself, mean the death of mankind. Maybe we’ll blow ourselves up before then, but 2012 isn’t some magical year that you should all be afraid of.

Dr. Michio Kaku, who is the greatest man walking this planet, was on the Opie and Anthony radio show last week, and he pretty much said, “Yes, this 2012 nonsense is, indeed, nonsense.” He says that if you look at the Mayan calendar, which is where this 2012 business originates, it runs in cycles. It just so happens that December 21, 2012 is the end of one such cycle, but that another cycle begins the very next day.

In other words, please do not lose sleep over this 2012 business. It’s just another silly money grab.