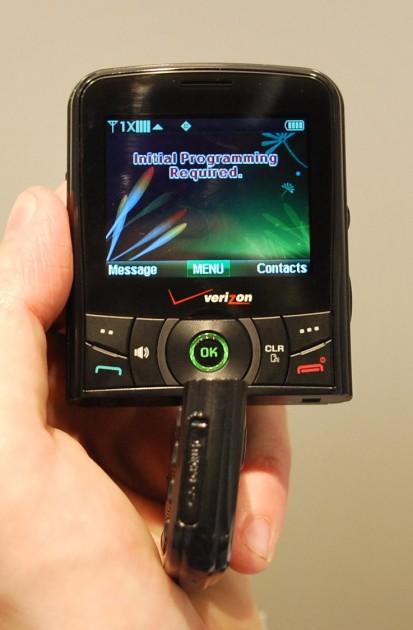 Immediately after the Verizon Razzle was announced, it was quite clear that this wasn’t a phone made for me. That said, after spending a bit of time with it, I’m not sure this phone is really made for anyone.

The Razzle’s gimmick (really – that’s what it is) is that it twists in the center to allow the user to switch between a QWERTY keyboard and a loudspeaker. Thing is, we can’t really figure out why the heck you’d want to do that. In what situations do you want music blasting directly into your face where you couldn’t just as easily turn the device over?

In speaker mode, the device lays flat. When you rotate into keyboard mode, however, the bottom portion juts out a bit. This made it a bit more comfortable to type on, though I’m not sure if that was just in my head. The loud speaker didn’t seem very, well, loud – but admittedly, our music selection was fairly limited, and the rumble of conversation in the convention center likely drowned it out a bit. The user interface was about as basic as could be, covered from edge to edge in green gradients.

Would I buy it? Nah. Would I recommend it to anyone? Probably not. But if you’re into it, and you can see yourself using the front-facing speaker for more than the first five minutes after you take the phone out of the box, we didn’t find anything too glaringly wrong.