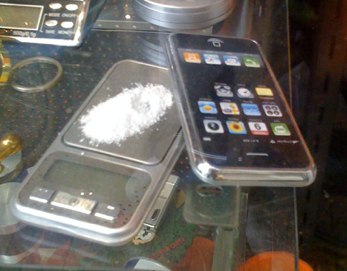 There are some modders out there whom I would accuse of having too much free time. Whoever made this latest iPhone tweak would certainly be among them.

This device was found in the Netherlands. A digital scale that is slim enough to fit in your pocket (jacket/purse/bag of holding), yet with the cover on, it is indistinguishable from an activated iPhone. Well minus the fact that the buttons don’t actually work.

It’s unfair to say that illicit drugs were the intent behind this device. Maybe the guy just liked weighing really small things. He had a penchant for mods, had a tiny, tiny kitchen and needed to measure spices accurately. I’ll just let you come to your own conclusion from the picture.