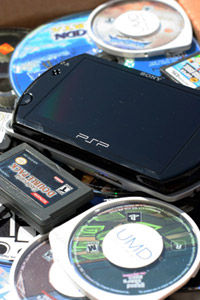 Oh, dear. The first sales reports of the PSP Go started trickling out yesterday, and they were sorta so-so, let’s say. (It’s no PS3 Slim, that’s for sure!) More details have emerged today, and, again, the PSP Go isn’t exactly lighting the world on fire.

An online retailer, ShopTo (I guess it’s big in the UK), has characterized the PSP Go’s start as “slow.” You can’t get any more dire than that, I don’t think.

What could be holding the PSP Go back? Well, for one, the reviews weren’t great, so perhaps people got scared off. Two, $250, really? (It’s even more in Europe.) Three, maybe people just aren’t prepared to drop their physical media yet? (The 802.11b connection doesn’t exactly help when you’re trying to download 1.00GB+ games.)

Sony did ostensibly bundle the biggest PSP game ever, Gran Turismo, with the system in Europe, so it can’t be that.