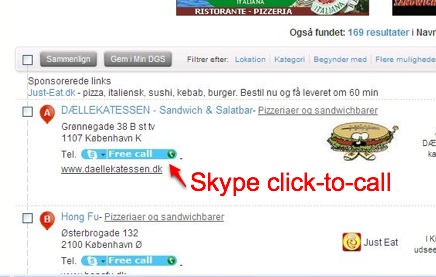 Part of Skype’s latest version for Windows (Skype 4.1) comes with a browser plug-in that lights up phone numbers on Web pages. Users can click on the numbers to automatically launch a Skype call, but they pay for the SkypeOut minutes. Skype is taking the same functionality and making those calls free to consumers by partnering with directory listing services who pay for them instead.

Initially, European Directories will pass along the calls for no additional charge to its business customers. Eventually, it hopes to demonstrate the value of the calls and charge for them on a click-per-call basis. As I explained back in April:

Click-to-call ads have been tried before, but this turns the actual phone number into an ad. Click it, and you call the business you were looking for, and the call is paid for by either the business or the Yellow Pages partner. The $32 billion Yellow Pages industry is quickly moving to the Web and Skype has the ability to light up any business phone number found on the Web.

Presumably, the Yellow Pages partners would only pay for numbers in their directories, so Skype would have to come up with a way to indicate which calls are free and which ones are not.

Turning phone numbers found on the Web into ads could help Skype open up a significant new line of revenue. But already Skype is playing catch-up against younger rivals. Yext, one of this year’s TechCrunch50 crop which just raised $25 million in new funding, has been turning online directory listings into click-to-call leads for years.

Now, Yext is moving beyond simple click-to-call ads to pay-per-action ads based on what people actually say in the call and monitored by sophisticated speech-to-text software. Skype has “no plans to do anything based on what someone is saying on the call,” says Don Albert, Skype’s Vice President of Advertising. And it might not have to. If it can get just a small portion of its 480 million users worldwide to start clicking on those free calls, its advertising business will do just fine.

Of course, that is assuming it settles those pesky lawsuits with the Skype founders about its continued access to the basic technology that Skype runs on.