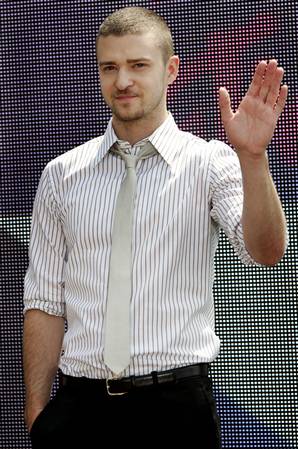 It’s weird that Justin Timberlake, he formerly of *NSync and Emmy-award-winning dick boxing fame, is currently spending his days pretending to be the guy who founded Plaxo. It’s also just weird that – along with Shawn Fanning’s pivotal cameo in the blasphemous remake of the Italian Job – both of the founders of Napster have now been key plot points in major Hollywood movies. And furthermore, as if all of that wasn’t just batshit weird enough – I discover that Justin Timberlake – when he’s not dressing up as the dude from the board of Yammer – has started to invest in Silicon Valley start-ups.  Weird weird weird.

Those, roughly, were my thoughts on Thursday evening, as I stood –  clutching a bottle of water – at the launch party for Robo.to, the latest product from Particle, which happens to be the start-up that Timberlake invested in.  Timberlake was in town too – in order to dress up as the guy from Causes – but couldn’t make the party due to work commitments. That was also weird, I thought. Not that he’d bailed in order to dress up as the other Facebook guy, but rather that him doing so had resulted in a reporter from US Weekly (which I discovered is pronounced “us”, rather than “US” – which is also weird, given that it’s not about “us”, but rather about “them”) emailing me for a comment.

The subject line of the email read ” US WEEKLY WOULD LIKE TO CHAT WITH YOU” which made me think, as it would you, Holy Shit! All caps! This must be important!

And indeed it was…

Just touching base with you in regards to your article you wrote regarding Justin Timberlake snubbing the event. Would love to chat with you. Can be OFF THE RECORD and totally CONFIDENTIAL if you prefer.

How much notice did JT people give you guys? Did he call himself personally to cancel? I heard that he may actually be in San Fran, is there any chance he will make it to the after event festivities?

Give me a call or let me know how I can reach you.

My first instinct, of course, was to fuck with her. To reply with a whole bunch of lies about how Timberlake had sent me flowers, or written me a really sweet note of apology. That would be hilarious, I thought, especially if it ended up in US Weekly. I mean, the fact that their fact checking doesn’t even extend to ensuring that they’re emailing the right person (it was MG’s story) or even the correct organisers (it wasn’t our event) suggests that I could basically send them any old bullshit and see it in print.

But that would be wrong, and unfair. After all, it was MG’s moment, not mine. So I did the right thing.

I fucked with MG…

from    Paul Carr
to    xxxxxxxx
cc: MG Siegler, Melissa Klein
subject    Re: From blog: US WEEKLY WOULD LIKE TO CHAT WITH YOU

Thanks for your email. Actually the piece was written by MG Siegler,
who I’m copying in to this email, along with Melissa who is handling
PR for the event.

MG would be better placed to tell you either ON or OFF the RECORD how
he heard the news. As far as I know JT sent him a bouquet of flowers
and a hand-written note of apology, which was both sweet and entirely
unnecessary.

Good luck with your story.

For good measure, I also Tweeted MG’s reaction to the fictitious flowers. I mean, sure, anyone seeing the tweet would think it was weird that Justin Timberlake would send flowers to a TechCrunch reporter. But then again, they’d also think it was weird that an US Weekly reporter would email me to ask about Justin Timberlake. They might also find it weird that, despite being in town, one of Particle’s main investors was too busy dressing up as the dude from the Facebook movie to attend his own party. If only Sean Parker had shown up at the party, wearing a three-piece suit and a trilby, the weirdness would have reached such a pitch that the world might have fallen off its axis.

But back to me. As I considered the almost countless ways that Timberlake slowly turning into the character he’s playing is weird, it occurred to me that something very weird is happening to geeks and celebrities generally. It’s been happening for a while in fact, starting probably – and fittingly – with Shawn Fanning appearing in the Italian Job.

For their part, geeks are becoming cool. And by cool I don’t mean ironic cool, like Michael Cera in Juno, or fake cool like Abby the would-be Suicide Girl in NCIS – I mean actual geeks are becoming actually cool, to the point where movies are getting made about them.

At the same time, cool people – celebrities, former boyband members, husbands of Demi Moore – are doing their best to become geeks. It used to be that computer club nerds grew up wanting to be celebrities, or at least to have sex with them. Now those same celebrities are so keen to emulate the nerds that they’ve started Tweeting and blogging and investing in startups. Equally, it used to be the natural order of things that rich movie stars got paid millions of dollars to dress up as people with a fraction of their personal wealth, now it’s the precisely the reverse: Sean Parker is paid considerably more to be Sean Parker than Justin Timberlake ever will.

If this trend continues, there has to be a point when the lines on the dorks/celebrities graph cross: when to all intents and purposes the two switch roles. And that day will not just be weird, but also terrifying. Just think of it for a moment: US weekly reports of Larry Page punching a staffer when he finds a green M&M in his dressing room. Scoble passed out in front of the Viper Room, a dozen paparazzo surrounding him, unaware that he’s already uploaded the photos himself to Flickr. And what’s that commotion in the bathroom stall? Oh, it’s just MG making out with a Pussycat Doll. Meanwhile the old-style celebrities will be working late at the office, pushing out a new release of their iPhone app before heading home to catch Arrington hosting the Soup.

Or at least that’s what I imagined as I stood at the party, holding my bottle of water and listening to the expectant hubbub of people speculating as to whether Timberlake might show up after all. We were all pretending to care about Robo.to, of course, but we all knew why we were really there. And at that, came a shout…

Holy crap! HE’S HERE! All caps – I panicked. I’m terrible at meeting celebrities; I always say exactly the wrong thing. “Roman, great to meet you. Have you met my 12 year old sister? You guys can use my room.” That kind of thing.

Heads turned. If there had been a piano player, he’d had stopped playing and you would have been able to hear a pin drop. But there wasn’t so he didn’t and you couldn’t – and anyway it was soon revealed to be a cruel joke. Justin was indeed at the party, but the geek Justin – Justin Kan from Justin.tv – not the celebrity one whose mere hint that he might show up at a party guarantees its success.

Saddened yet somehow relieved that – for that night at least – the natural order of things remained intact, I took a final sip of my water and headed home, via dinner at In-N-Out Burger. Meanwhile, somewhere across the city, I imagined Justin Timberlake partying with the Pussycat Dolls, or drunk dialling Britney Spears or whatever it is that proper celebrities do.

I’m only speculating on that last bit, of course, but what the hell – US Weekly, call me. I’ll Photoshop up some pictures.