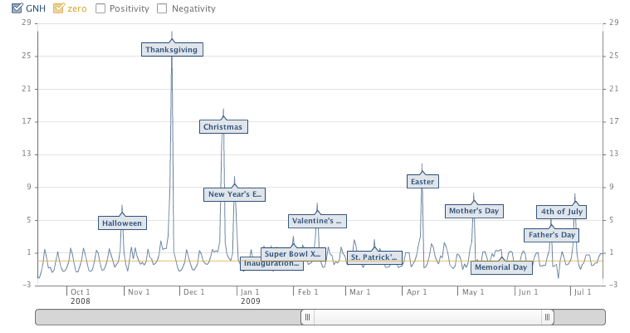 With over 300 million users and 40 million daily status updates, Facebook has an immense amount of data that could potentially be used to gauge any number of things, from the hottest up-and-coming bands to the most discussed political issues. Earlier this week some of the site’s engineers decided to use this dataset to measure something a bit more fundamental: happiness. Dubbed Gross National Happiness, this new prototype application does its best to determine if Facebook users in the United States are happy or sad.

Here’s how the application’s developers describe it:

…Grouped together, the status updates of millions of Facebook users from every demographic in the nation can work together to say something about how we as a nation are doing. Measuring how well-off, happy or satisfied with life the citizens of a nation are is part of the Gross National Happiness movement. This graph represents how “happy” the nation is doing from day to day, by looking at how many positive and negative words people are using when they update their status: When people are using more positive words (or fewer negative words) in their status updates than usual, that day is happier than usual!

Data is collected from “public and semi-public forums” on Facebook, which is all anonymized before its analyzed. To determine if a particular status message is happy or sad (or neither), the app searches for popular phrases and words that the engineers have associated with each sentiment.

You can adjust the graph by sliding the bar at the bottom of the screen. You can also adjust the zoom by dragging the handlebars on the slider, and can actually watch happiness jump hour-to-hour, though it’s a bit difficult to navigate when you’re zoomed in that far. It’s fun to play around with, but you aren’t going to find many surprises: happiness generally hits a low on Mondays, then gradually grows up through the weekend when it drops again as the work-week begins. Peaks are all found around holidays, with Thanksgiving drawing the most happiness. Also worth nothing: this year there was an abrupt drop in happiness in late June, which is likely associated with the tragic death of Michael Jackson.

The app is part of Facebook’s recently released Prototypes section, which gives Facebook engineers a chance to show off the projects they’ve built before they’re ready for prime-time.